Are there people who do not love dogs? A rare minority, perhaps. But a good number of the people around the world absolutely adore the furry and loyal companions and as rightly put, ‘man’s best friend.’ And now China has added a robotic twist by blending the two aspects people love in the country, namely, pets and technology. This latest and quite innovative technological advancement goes by the name ‘AlphaDog.’ 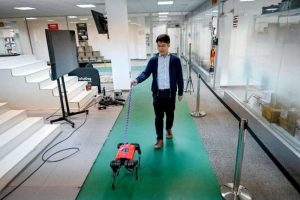 The robotic hound ‘sees’ and ‘hears’ using sensors and artificial intelligence technology. And the owner can even enjoy the experience of taking it out for a walk. Much similar to a real-life dog, with added advantages of the smart technology it is developed with, the AlphaDog is expected to grab the attention a good majority with its bark.

The product is developed by Weilan.

A four-legged machine called ‘Spot’ developed by Boston Dynamics for industrial use is the forerunner of AlphaDog. With its appearance in a number of YouTube videos, ‘Spot’ had indeed gained the spotlight and it is expected that the newest robo-dog in town will also turn some heads.

According to the developers, the robot dog is capable of moving at a speed of 15 kilometers per hour. Adding to the intrigue is the fact that it can even spin on the spot excitedly much similar to a happy puppy. The four legs strengthened by hardcore metal make it much more stable and solid than a real dog.

“It can predict the friction and the height of the ground(to) adjust its height, adjust the stride frequency, and adapt to the environment.”

In order to facilitate enhanced autonomous operation, 5G technology is being used. This way, super-fast internet speeds up the reaction time.

The first month of sales reflect a favorable result with over 1800 AlphaDogs off the shelf. The customers are mostly tech nerds and computer developers with a good number of kids who seem to be fond of the four-legged robot.

Developers of the product also envision a future wherein the robots will be of substantial help to the visually impaired. With further updates in the future, the dog will also be able to bark and the addition of human voices might allow owner to dog conversations.