CNBC’s Andrew Sorkin showed us what a real interview looks like and Twitter is impressed Sorkin, in an interview with GM CEO, Mary Barra pressed on about Tesla's leading position in the EV space in comparison to GM leaving Barra stumbling for answers. 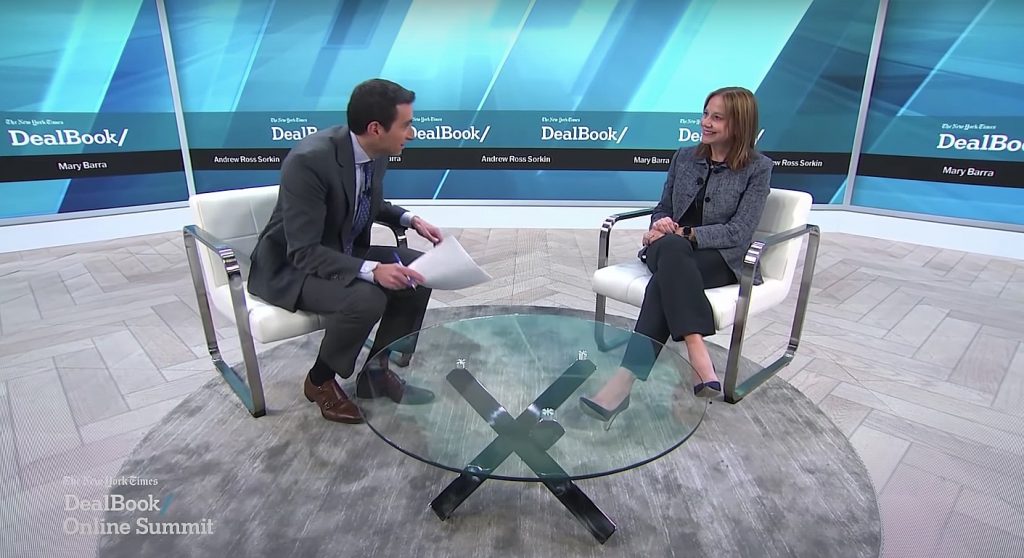 CNBC’s Andrew Sorkin scored a few goals in the interview with General Motors CEO, Mary Barra who was clearly stumbling around looking for ways to evade the rather sharp questions. Sorkin did not bother sugarcoating his questions when he asked the GM CEO about Tesla’s leading position and the comparatively high market cap. However, it appears that Mary Barra is under a blissful illusion that General Motors is still the EV leader in the United States, which is clearly not the case. While Tesla holds a 60 percent market share, GM just has a mere 9 percent. Either Barra’s math has gone bad or she is clearly trying to turn a blind eye to Tesla’s irrefutable success. And even better, the GM CEO refused to even acknowledge Tesla’s success despite the pressing questions. And Twitter is quite intrigued. Because memes have started their descend from all directions. Here is the full interview.

It takes some nerve to acknowledge the success and growth of your rivals. And General Motors CEO, Mary Barra failed to exhibit that nerve as she downright refused to give Tesla its due credit. Andrew Sorkin was on point with his sharp questions, but the responses were far from sharp. It seems like somebody has to inform the GM CEO of their company’s current position and that of Tesla. Because, from the way she talks, it seems like she has absolutely no idea. All we are asking is to give credit where it is due and if you aren’t able to do that, then you definitely need a reality check.

Andrew Sorkin definitely nailed it with his questions, which almost hit the GM CEO like sharp arrows. However, we should give it to her for holding her ground despite the back-to-back questions. At one point, the interviewer was definitely irritated with the staunch attitude and refusal to accept the facts. Eventually, Barra said that she would prefer talking about GM than Tesla. Sure, when you cannot answer, just skip the questions altogether. If Barra thought she was being clever at evading these questions, then she was wrong. Because her lack of acknowledgement has had the wrong impact and people are talking. And some of her responses are totally not related to the questions asked. Well, frankly speaking, it makes perfect sense why Barra is uncomfortable talking about Tesla, who clearly is the EV leader right now. The position GM claims to be holding, even though it is struggling in the market. Here are a few snippets from the very interesting interview that might help you get a picture.

This is true. Also, Tesla employees get health insurance, stock & other benefits.

CNBC's Sorkin: "You've spent a lot of time with this administration. They've had a number of meetings around EVs; Tesla has not been invited to those meetings. Do you know why that is? Do you sit there and say this is a little strange given the roll that they've (Tesla) played."

We just hope Barra had a glass of water next to her. From the look of it, seems like she would have needed a lot of it.

The Twitter town was adept at taking up the topic of the interview. The majority of the users weren’t exactly pleased by Mary Barra’s stand concerning Tesla’s position. And quite naturally, a plethora of reactions, responses, and memes started gracing Twitter ever since. Let us flip through a few.

I can't even believe this is the CEO of GM. My son who is a Chevy fan and race car guy told me about the lower case GM logo remake. Being in marketing I knew right away the CEO was not a leader. Anyone that would approve this lower case version if an iconic brand is not a leader pic.twitter.com/zINAHpzcCD

The government definitely looks a bit shady for the way it is behaving. Creating wrong narratives is not exactly what people expect.

So much hate for @elonmusk . He's taken over a million gas consuming cars off the roads and gets no respect for it. The plant is in California for a reason…it's the one with the biggest emissions problem. He should be heralded as an innovator.

Mary Barra, with all due respect, do you have an answer for that? Or are we still talking fantasy?

Can you even buy an EV from GM today? Are any for sale?

Now, over to the memes.

Congratulations, Mary Barra, for leading us into the automotive age! #MaryLed pic.twitter.com/7SAu5R86xU

Sarcasm at its finest. What do you think?

Mary Barra and her team at mission control celebrating the successful reentry of Apollo 13. #MaryLed pic.twitter.com/7V4jYHcLZr

All I can say is that you asked for it. All you had to do was accept a simple fact.

The interview sure got GM famous. Because, before nobody was even talking about it.

It is very hard to maintain a straight face at this point.

You wanna have a good laugh? Search for #MaryLed here on @Twitter 🤣

Mary Barra gives us an in depth interview on why, after disrupting the horse drawn carriage, she took to the skies to disrupt birds. (With her brother, Wilbur.) #MaryLed pic.twitter.com/kEydXg4gH9

Mary Barra takes a few moments to talk about how she envisioned an EV future and sunk her fortune into founding #Tesla. #MaryLed pic.twitter.com/qMzxr5LA1y

The world will never forget when Mary Barra laid out her plans for an all electric automobile future. 😌 #MaryLed pic.twitter.com/AGAelonRnS

Mary Barra tired, but triumphant after being the first woman to fly solo across the Atlantic Ocean. 🥳 #MaryLed pic.twitter.com/WYPMKHlp4G

She definitely did not see this coming.

Of course NONE of this would have been possible had Mary Barra not first invented the wheel. #MaryLed pic.twitter.com/XcMiTDQocS

Congrats to GM leading the world to the robotics age! #Maryled pic.twitter.com/oavkPpyRyB

At this point, I am out of words.

Here’s Mary Barra demonstrating her new invention – the telephone. Few at the time understood the implications of this new technology. #MaryLed pic.twitter.com/JGOLt94xWU

Wrapping up, let’s give credit where it is due. So here we go.