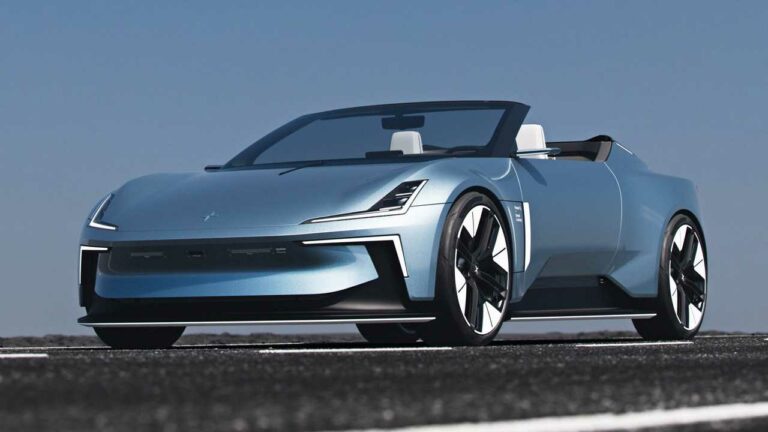 Geely and Volvo-backed Polestar released a new concept last week, Polestar O2. Currently, the details about its power, range and other configurations are not known. This new concept will adopt a new bonded aluminum platform that will be developed by the firm’s British team for Polestar 5. The advantages of this new platform will be tighter body control, agile dynamic response, and high rigidity.

The Porsche Taycan targeting Precept concept was indeed a good looker and the O2 evaluates it a couple of notches above with the GT demeanour. Whether the two-door sportscar will enter production or not is yet unknown but the four-door Precept concept will as the Polestar 5. The O2 concept has several commonalities with the Precept and it has a convertible top.

The Polestar O2 comprises a mean-looking front fascia with L-shaped sharp design elements and the bonnet dips downwards connecting with the bumper forming an edgy pattern. The body panels are rather clean with notable curvaceous elements and topping them all off are the pronounced front splitter and the large-sized tires with a heavily raked front windshield.

Other highlights are prominent black sills on the sides, a peculiar motif, and a slender rear profile. The Polestar O2 concept boasts a glass roof that slides below the rear deck, full-width LED tail lamps covering the width of the vehicle, a massive rear diffuser, etc. The concept is based on the same architecture as the Precept with the wheelbase shortened by 307 mm. On the inside, a 15-inch portrait-oriented touchscreen infotainment system is grafted on the center console while a digital instrument cluster is also available. With minimalistic buttons, the cabin looks posh and futuristic and a drone can be launched while the car is on the move according to Polestar as it can follow the O2 at speeds of up to 90 kmph.

“From packaging and how it’s constructed, it’s possible to put such a car in production,” Ingenlath said when asked by Autocar UK if the O2 will lead to a production version. “Our concept cars breed that spirit of being tangible and realistic.”

Although he insisted there are no firm plans beyond the forthcoming Polestar 3 (large SUV), 4 (medium SUV), and 5, he added. “What is beyond 2025, the future will tell. We definitely put out a dream here, and we would be very irresponsible if we would not do everything possible to actually live our dreams and make them real,” Ingenlath added.