Critical Minerals For EV Batteries Are Declining In America These minerals are essential for national defense, electric vehicles and wind power.

A few dozen critical minerals are much needed while making electric vehicle batteries, defense technology, and other renewable energy resources. The country is set to initial its progress towards zero-carbon emissions, but this shortage of raw materials is a concern.

Producing technology within the homeland is no easy job. America has been receiving its critical mineral-based raw materials from China till now. The importance of minerals keeps changes with the demand. In the late ’90s the demand for petrol, gas, and other fuels grew as the automobile industry started producing affordable vehicles.

Currently, the laws in the US are changing in such a way that their previous dependence on other countries for raw materials is eradicating. It is expected for companies to look for options within the country.

Contradicting to the situation, America has stringent rules when it comes to mining and finding minerals. Which in turn resulted in not having sufficient critical minerals needed for manufacturing the technology in demand.

The alloys like magnets and catalysts are critical components for making satellites, guidance systems, communication systems, and also vehicle batteries.

Indeed, the country has already taken charge and is working towards opting for alternatives locally. Especially the defense department made new contracts with production operations and earth mining in California, Texas, and Nebraska. These mining are specifically for rare earth materials, which are of utmost importance and rare.

There are other countries that have these critical minerals. Like Electric vehicle battery minerals can be obtained from Estonia, Malaysia, and Japan, other than China. While steel-making minerals (Manganese) can be found in South Africa, Australia, and Gabon. However, Cesium used for research and development is solely available in Canada, as of now. 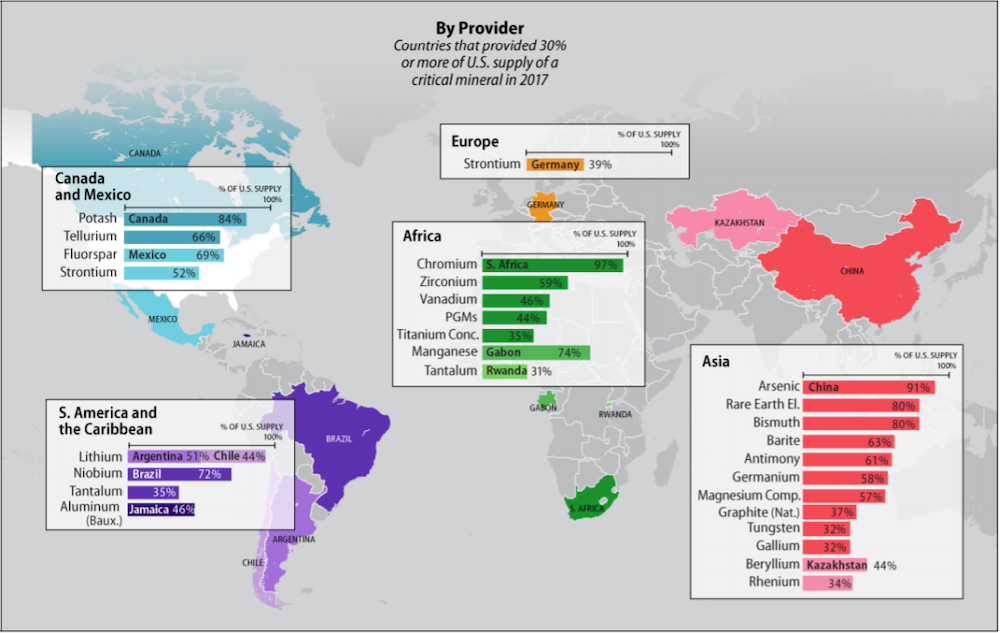 As every country is looking towards making progress in sustainable energy, they have to keep the existing minerals with them.

However, America, they have largely been dependent on other countries for the raw materials and the tough goals made by Joe Biden with a ten-year plan will need large amounts of raw materials.

Additionally, not every deal available with different countries is appealing for the US and the tension is obvious among them. Building a single fighter jet would require at least 920 pounds of minerals. The demand is not simply in the size of chips, but more than that. Furthermore, the need to shift to electric vehicles will need a lot more lithium-ion batteries than anticipated.

Though each entity act on their own, as the government restricts and moves towards local critical minerals, the challenge increases. New power plants are coming up, like the one for Tellurium in Utah and Lithium mining in California.