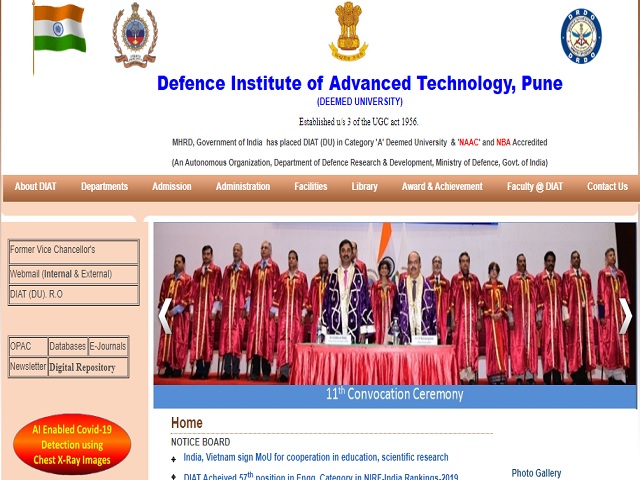 DIAT is the short form of Defence Institute of Advanced Technology is a deemed to be university under DRDO- Department of Defence Research and Development. The DRDO further comes under the Ministry of Defence, Government of India.

The Defence Institute of Advanced Technology, hereafter referred to as DIAT has recently launched its first on-campus company under its IIC – Innovation and Incubation Centre Scheme. The government-owned deemed university under the Ministry of Defence has initiated its entrepreneurial and start-up programs through its Innovation and Incubation Centre policy, as mentioned in a report by The Indian Express.

As the Indian start-up ecosystem in on a boost from the past many months because of the ongoing COVID-19 pandemic and the rise of digitisation in India, the Indian government has decided to give acknowledgement and support to this phenomenon by introducing schemes and initiatives to promote the country’s start-up and entrepreneurial ecosystem.

According to several reports, DIAT is a deemed to be university which has not yet been affiliated. As mentioned, it has recently launched its first on-campus company called Navyukti Innovations Private Limited which is led by Professor Sangeeta Kale along with several other experts including market experts, medical professionals and some institute alumni, according to The Indian Express.

The new on-campus company was inaugurated last week by Dr CP Ramanarayanan, Vice-Chancellor, DIAT who mentioned in his announcement that the company was launched under DIAT’s IIC policy which promotes entrepreneurship and start-ups to be established in the field of Defence Technology along with future-oriented technologies. He further added that DIAT aims to engage students, faculties, scholars and alumni of the Institute in the activities of the Innovation and Incubation Centre activities.

Start-ups have become a major part of the Indian ecosystem with a boost from the Indian government. Yes, the government is promoting several initiatives to boost this start-up culture in the country which will give India, global recognition while strengthening its economy at large.

Under the leadership of Prime Minister Narendra Modi, the Indian government has launched its ‘Atmanirbhar Bharat’ initiative which means Self-reliant India. Under this scheme, the government is promoting start-ups and companies to begin manufacturing locally and not be completely dependent on international markets. The success of this initiative will boost the country’s economy and make India a global exporter of products.

The idea behind DIAT supports this initiative where the institute is focussed on developing indigenous technologies that will contribute to the Government’s initiative to become self-reliant. The success of such initiatives will surely put India in the position of a market leader in future technologies.