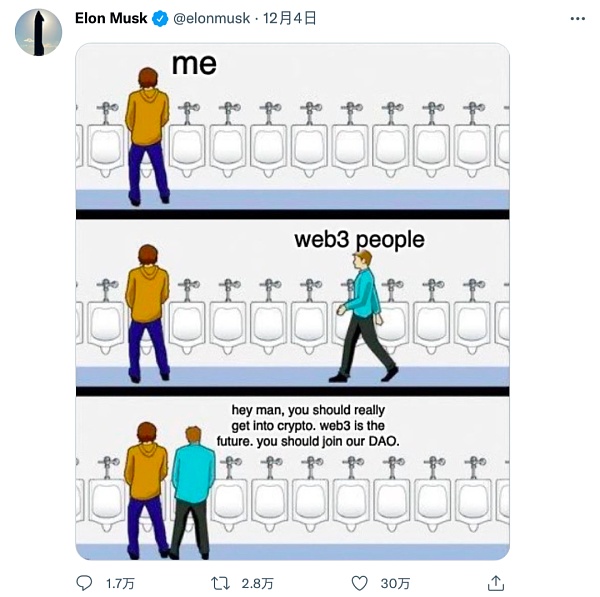 Elon Musk questioned, “Given the almost unimaginable nature of the present, what will the future be?” in a TikTok of a 1995 discussion between Bill Gates and David Letterman on Sunday.

Gates introduces the internet to Letterman in the video, which was new and odd to most people at the time. After watching the clip, the TikTok user who submitted the interview connects Gates’ and Letterman’s conversation to  “what’s happening now with Web3.”

I’m not suggesting web3 is real – seems more marketing buzzword than reality right now – just wondering what the future will be like in 10, 20 or 30 years. 2051 sounds crazy futuristic!

Web3 is a decentralised version of the internet based on blockchain technology, which is used to power nonfungible tokens (NFTs) and cryptocurrencies such as bitcoin. Supporters of Web3 believe that today’s internet is dominated by a few giant corporations, such as Amazon, Apple, Alphabet, and Facebook (now Meta). Instead, Web3 allows consumers to govern their own data.

Web3, on the other hand, “seems more marketing buzzword than reality right now,” according to Musk.

Because Web3 is still in its early stages, many people agree with Musk that it is little more than a buzzword. Some believe it isn’t yet sufficiently filled out enough to be regarded fully real.

Supporters, on the other hand, have a different perspective. Decentralized financial, or DeFi, applications, decentralised autonomous organisations, or DAOs, and the NFT space all show signs of Web3. Despite customer reaction, companies like Kickstarter and Discord have attempted to start building in Web3.

The concept of a totally decentralised, seamless version of the internet, on the other hand, is still a long way off, with many unknowns to sift through.

The world’s richest person took to Twitter to write: “Has anyone seen web3? I can’t find it.”

Has anyone seen web3? I can’t find it.

It’s somewhere between a and z

Earlier in the day, Dorsey used the social media platform he cofounded to express his discontent with Web3 technology and venture capital firms like Andreesen Horowitz, whom he accused of attempting to “own” Web3.

“You don’t own ‘web3’,” Dorsey tweeted. “The VCs and their LPs do. It will never escape their incentives,” he wrote.

We have bigger issues if a tweet stifles hopes and dreams. Currently it’s not wrong. Critique can help fix, or divert energy to something more important.