EVERYTHING YOU WANTED TO KNOW ABOUT INDIA’S LARGEST ONLINE MARKETPLACE – SNAPDEAL! The story of the rise and fall of Snapdeal.

Japan has Miniso, Canada has Dollarama and the US has Dollar Trees. What do Indians have? Snapdeal! Founded by Kunal Bahl and Rohit Bansal on the 4th of February 2010, this once flash deal website has taken over almost every nook and corner of the nation. Even when we see unicorn companies and startups sprouting up in recent years, nothing seems to beat the remarkable journey of Snapdeal and the odds they have overcome to hold their place even almost nine years after its inception.

With an overall market share of 1.7 Trillion USD, the retail sector is one of the biggest contributors to the economy across the globe. when it comes to India, the e-commerce sector has even more scope of expansion. The Indian e-commerce market is expected to grow to touch around 33 billion USD.

In the year 2010, e-commerce giants such as Amazon and Flipkart were only starting to make a noise. Snapdeal hence had some big sharks in the vicinity, but the strategy adopted by them was quite unique. Snapdeal concentrated on a very different segment of demography, who gave much importance to the discounts and flash sales.

Like any other successful venture, Snapdeal also was able to achieve the heights due to the strong foundation laid by its founders. Kunal Bahl and Rohit Bansal started their business venture by the name MoneySaver in 2010, which was an offline daily deal website. The customers would find coupons and deals for various beauty and wellness products, travel, food and so on and around 15000 coupons were sold within the initial 3 months. Later, after realizing the growing opportunities in the E-commerce sector, in 2011, they launched Snapdeal which is an online marketplace. 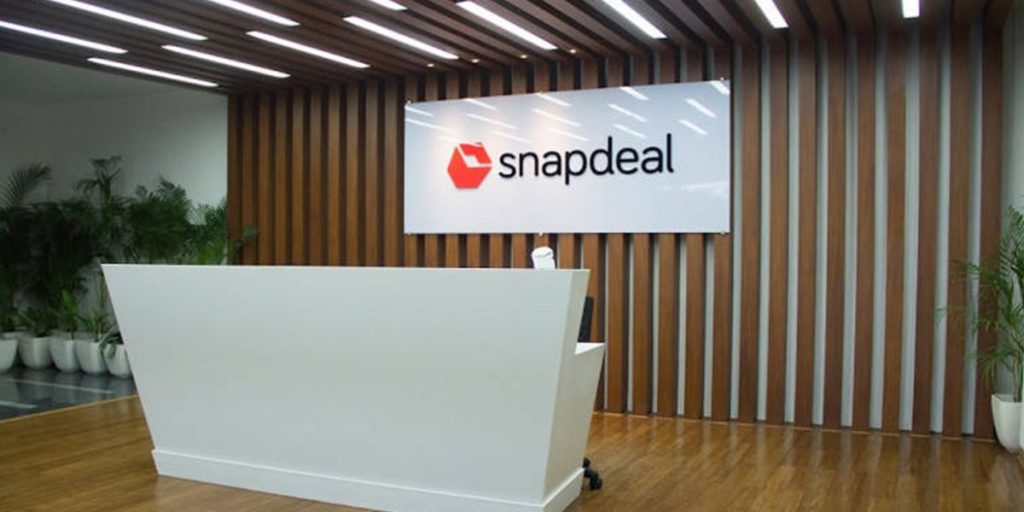 Flipkart and Amazon were already making some noise in the arena at the time, but this never stopped the duo from taking risks and leaps of faith. It is quite remarkable as to how Snapdeal grew to become India’s very own dollar store. They sell products at a value-based price and it fits the pocket of an everyday Indian. They have also created a niche of their own, that separates them from the other E-commerce giants.

Snapdeal has always had its own group of customers. They have successfully found out their niche and this is what has led them to be a success in the highly competitive e-commerce industry. They had earlier adopted a business model of Groupons which was not so familiar for Indian vendors. 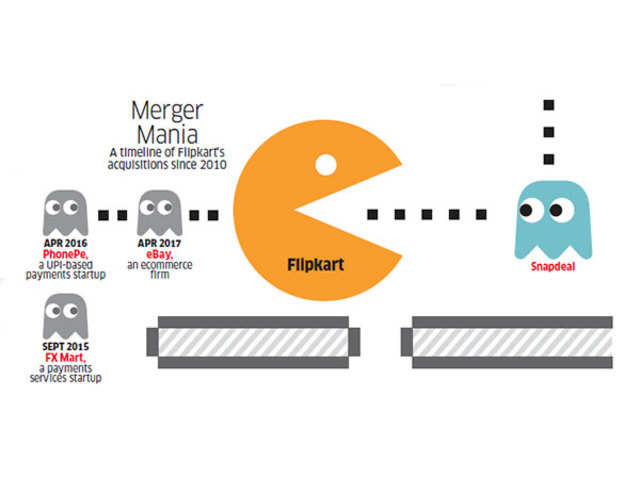 Gradually, the company moved on to the normal way of dealing with vendors like Flipkart and Amazon, where they are paid for their products beforehand and not as a share of profit. Again the biggest USP of Snapdeal is indeed the massive discounts they provide.

Indian customers are not completely belonging to the group of people who wants to buy the best quality products sitting in the luxury of their homes. There is a large section of people who rely on the massive discounts that they can find only online.

They sell decent quality products at a much cheaper price and operates under a B2C model like many other e-commerce websites. They sell over 35 million products belonging to a wide variety of categories. They even introduced the idea of Band Stores that made users create their own brands and sell them.

Kunal Bahl and Rohit Bansal are the co-founders of Snapdeal. Both of them were well versed in their respective industries before building the Snapdeal empire. They are now one of the most experienced business partners present, who knows the e-commerce industry inside out. But before all that, they were also just beginners. 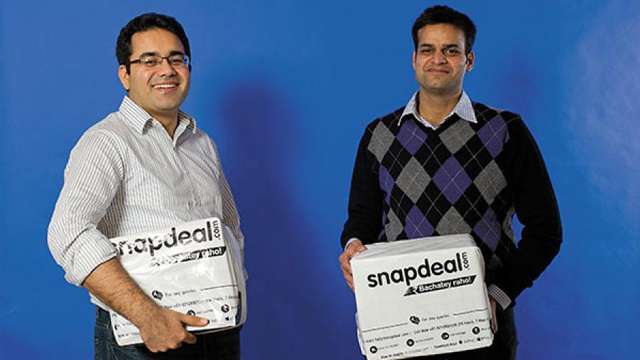 Kunal Bhal had his education completed from the University of Pennsylvania, Wharton University and Kellogg School of Management. He then went on to work for Microsoft, where he met his now business partner, Rohith Bansal. Rohith was an alumnus of the prestigious IIT, Delhi and both of them together decided to start a daily deal website called MoneySaver.

They did not have much of a business background before starting MoneySaver but did learn the trends of the industry once they started doing the business. This has definitely helped them in their journey of Snapdeal.

Finding the investors for a startup in India was a bit more of a challenge back in 2011. The name Vani Kola would resonate with the founders very much, as the investment from her venture capital firm is what made Snapdeal a reality. 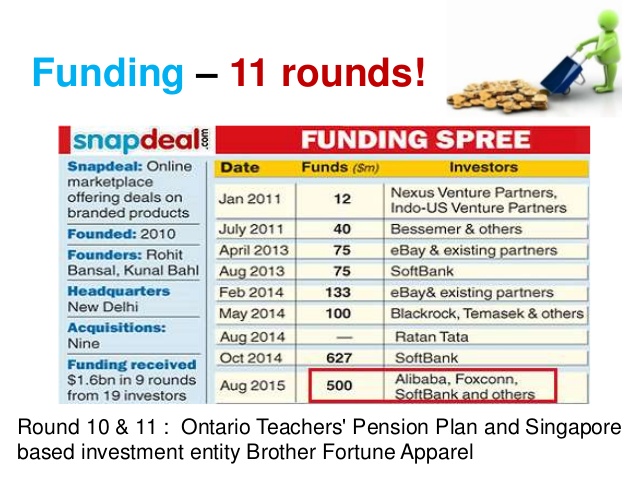 The investments started flooding in after a whopping $12 million was funded by Nexus Venture Partners in January of 2011. Later in the same year, $45 million dollars were funded by Bessemer Venture Partners. It was all an uphill journey from there, a bit competitive, but always in the right direction. eBay was the next big gun, who invested around $50 million in the startup.

A series of funding from $133 million to $105 million was received from firms such as Kalaari Capital, Intel Capital, and Saama Capital and so on. The biggest investment amount that Snapdeal has ever received was from Softbank in 2014.

The amount rounded to a whopping $647 million. One of the organizations that Snapdeal always looked up to, both as an inspiration and motivation was Alibaba. In August of 2015, Snapdeal managed to get an investment from the Alibaba Group as well. This was indeed a milestone for the firm!

Every successful venture will have its very own rags to riches story. Snapdeal has indeed kept the tradition alive. Even though there were not many rags in their story, they do have a grasping success story to tell. One thing that we can all agree upon is that the E-commerce market in India is full of cut-throat competition. Amazon and Flipkart have almost completely monopolized the sector. 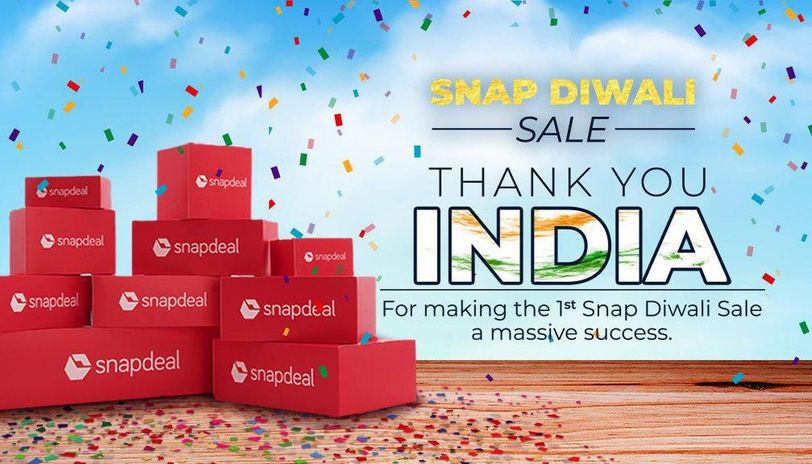 How do you think Snapdeal managed to walk through this rough road and succeed? They understand the Indian market more than their rivals, to begin with. Unlike the U.S and other developed nations, the customers in India do not pose a lack of time as an issue as opposed to a lack of money.

This is why Snapdeal has always kept it their priority to sell products at a lower rate compared to its competitors. One of its real competition is the Chinese E-commerce giant Club Factory. But overthrowing them was a cakewalk for Snapdeal as they follow a more efficient horizontal e-commerce model. They quickly grew from an offline coupon selling company to the third biggest e-commerce platform in India. This growth is not only phenomenal but also a bit magical.

Some of the controversies the e-commerce giant had to face were interesting, not because of their fault. Take the case of Aamir Khan and his altercation with the public because of his comment on the religious intolerance. This was the time when the actor was the brand ambassador of Snapdeal. The ‘Dil ki Deal’ campaign was canceled as the public was rigorously uninstalling the app doubting any connection between the actor and the firm.

Snapdeal later came on to terminate the contract with Aamir Khan and retract the advertisement. Similarly, the public again had misplaced anger towards Snapdeal when they confused it with Snapchat, where the founder of the latter commented that Indians were too poor to use Snapchat. This too was solved later strategically.  Check out this website to know more. https://yourstory.com/2019/10/snapdeal-flipkart-amazon-ggv-capital-hans-tung

What’s Success? It’s the ability to go from failure to failure without losing enthusiasm. Snapdeal never gave up, even when everyone thought they will. They did not sell their company to Flipkart because both Rohit and Kunal had a strong belief that the Indian e-commerce sector was still very young and that they had ample opportunity to bounce back. And guess what?. 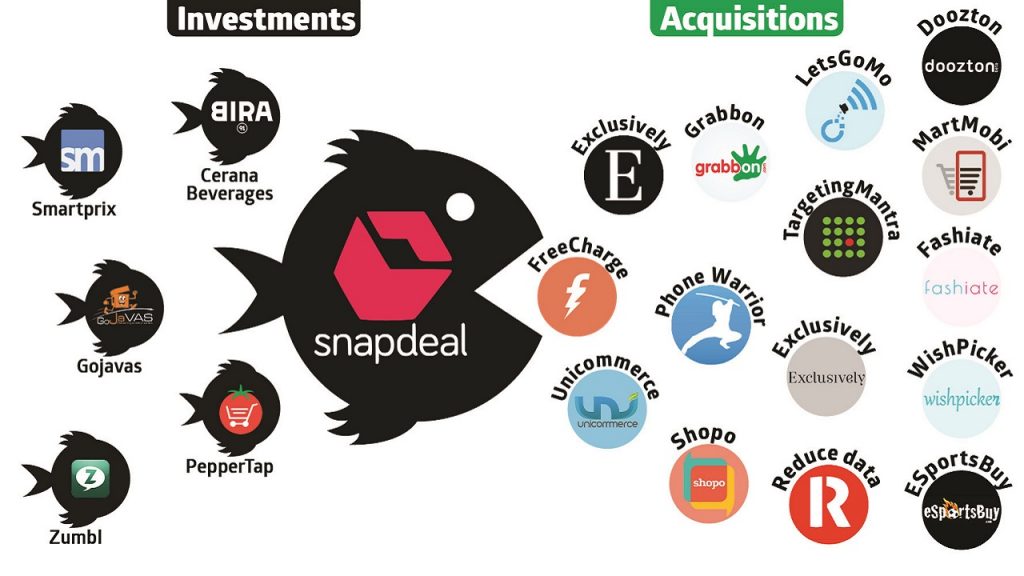 Bounce back they did! Snapdeal 2.0 is the revamped version that was launched in 2019 where they sold off all the unprofitable companies under them such as Freecharge and did some major layoffs. They hit their highest customer transaction number in the history of the firm. They have also added numerous sellers to their list. The recent Diwali sale saw a 52% growth in the sales volume, which is a mammoth accomplishment. This teaches us that setbacks and comebacks are just the two sides of the same coin.

Snapdeal has taught us a lot of lessons. They have taught us to be open to opportunities, to take calculated risks, to fall but to rise again and most important of all, to fight for what matters the most. For a firm that has seen almost everything from the rock bottom to the pinnacle, the future is bright and filled with possibilities of further growth.

Snapdeal even has the potential to outperform Flipkart and even Amazon to become the biggest e-commerce platform in India. Nobody knows what the future holds, but we sure know that Snapdeal is not a quitter. Let’s see what they have in store for us next! So stay tuned!