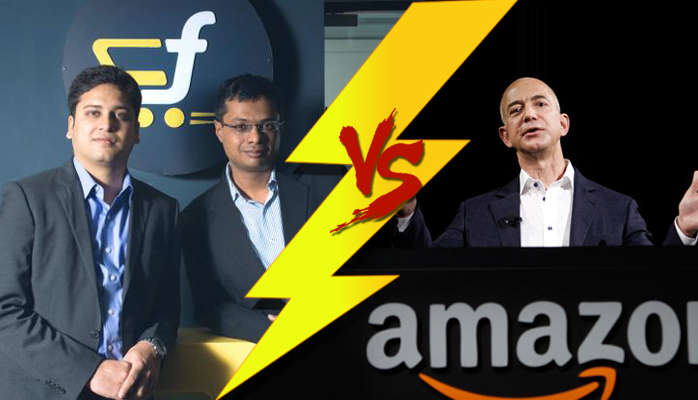 Flipkart Vs Amazon: The Dawn Of Ecommerce Leader In 2017

The tidings of Kalyan Krishnamurthy being named as the new CEO of Flipkart has created a hoo-hah in the business ecosystem. Instead of opting to choose a professional, choosing an investor helps in crystallizing the real picture. Let us have a quick look at various grimaces of this startup.

A company co-founded by Binny Bansal and Sachin Bansal made its entry in the Indian market in the year 2007. Conglomerates of Amazon, both the individuals left the company with a view to making a difference in the Indian market. By the looks of it, they did stir the market. At a time when the Indian e-commerce market was not booming, Flipkart accessorise the booming process.

Many credits the booming of Flipkart to its Cash on Delivery policy but those with a good understanding of the market would credit the initial success of the company to its “execution”.

Back in 2007 when the company started off with just the selling of books, what impressed the investors of Flipkart was the level of execution and dedication showed by the co-founders. The customers back then would also reply in affirmative praising the level of service provided by the company.

So Execution apart from C.O.D policy paved way for Flipkart’s initial success in the Indian market.

Effects Of Amazon’s Entry In The Indian Market Place

Every story has its share of twists and turns. The story of Indian E-commerce market also has one.The biggest cusp for Flipkart was when Amazon came into the picture in the year 2013.

As part of a mockery, some people in the industry knew that if Binny Bansal and Sachin Bansal are cubs, Jeff Bezos is the lion here with more than 20 years of experience. He just knew it too well how to go through the market making sure that amazon’s hold.

Just like Flipkart, Amazon put its initial focus over selling of books and movies. While buying books online was still a commonplace for the Indian market, movies were a new addition.Starting off slowly, Amazon put its move with utmost care in the market.

One advantage came off for Amazon was the online portal it provided for the small sellers of the local market. When on one hand, Flipkart focused on cash on delivery and fast delivery service, on the other hand, Amazon walked on the same line. The only difference being that the sale and purchase were from the local sellers. So it was in a way a door step delivery only order being placed online.

One more advantage which Amazon experienced was the large pocket budgets from Amazon.com Investment has never been an issue for the company.

So overall, Amazon’s entry did create a little bit of a hassle for the company.

Change Of Time: Myntra And Jabong In The Picture

The year 2014 came with a great surprisal in the country when we heard the news of Myntra being acquired by Flipkart. With a view to rule the Indian e-commerce market, Myntra happily joined hands with Flipkart and what other than fashion to fulfil the dream of Flipkart’s domination in the market.

The purchase of Jabong in the year 2016 stirred Flipkart’s pace in its competition with Amazon. It came as a surprise given the fact that Flipkart already acquires Myntra. When questioned about the same, the officials of the company made it clear with their response that they will do anything and everything to make sure Flipkart stands at the top. The acquisition of Jabong will ensure the extension of its dominance in the fashion space and is seen as a move by the company to preserve its position as India’s No.1 e-commerce marketplace in the face of an onslaught by Amazon India.

The Gritty Game Of Hiring And Leaving

In the past 10 years, the company has witnessed the appointment of three Chief Executive officers. Initial one being Mr. Sachin Bansal. Last year, the appointment of Binny Bansal, the co-founder of Flipkart did not put much of a chaos in the market. But the new year’s surprise of the appointment of Kalyan Krishnamurthy has forced the speculators to speculate the situation.

One view suggests that Kalyan’s appointment is to make the budding Flipkart turnaround last. Since 2013, Bansals have turned up to Kalyan for help and as it appears he has very well handled the situation. His appointment will make sure Flipkart acquires sufficient funds for the business because who better than an investor to strategise the allocation of funds.

Related Read: Will Walmart’s Speculative Investment Act As A Powerful Armor In The Battle Between Flipkart And Amazon India?

Other views are a little contrary to this one. Some say that Kalyan’s appointment has something to do with increasing the worth of the company so that at the time of sale in the next year or so, the company owners could acquire enough funds from that sale. Speculators say that Tiger Global has something to do with the appointment. Flipkart has always been backed by Tiger Global and Kalyan being Tiger Global’s ex-employee is trying to ease the situation in the interim.

What exactly is the real picture? Let’s wait for a few months or years per say to find that out.

A very ambiguous question indeed, who is at the first position at present?

Is it Amazon India or Flipkart? Let us discuss the different views regarding the same.

Amazon has an edge here.Its customer service is celebrated and people are more certain of replacements and after sales services when they buy from Amazon. Amazon operates guided by its well-known vision of being earth’s most customer centric company.

Sellers like Amazon over Flipkart. Flipkart competes with all other sellers through WS Retail. Though, Flipkart officially does not own WS Retail anymore, it is often alleged that has circumvented the law to show separate ownership of WS Retail.

Flipkart has been attempting to consolidate its position by recent mergers and acquisitions(Myntra, Jabong), as well as becoming self-sustained, developing its own payment gateway and logistics services.

Flipkart definitely has the home-brewed company advantage, having adapted to Indian scenario, and created the industry in India. However, there is a catch. The funding that Amazon can garner and the strength of the platform makes it a tough competitor to Flipkart. Yet Flipkart ensures fulfilling its funding side from time to time.

So peeps, Flipkart’s rivalry with Amazon is in a way less about funding and more about customer delight.

AND who is the winner? Maybe that’s really an ambiguous question. One cannot answer it until now. There are times when Amazon has an edge over Flipkart and there are other times when Flipkart has got an edge over Amazon, To be fair, Amazon does get a lot of support by way of huge amounts of funding but rest reality is just the same.