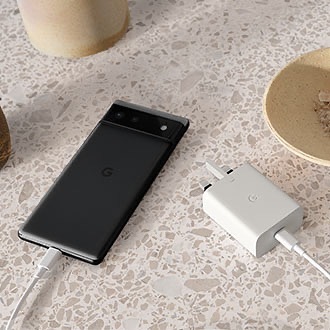 You might be excused for believing that the Google Pixel 6 and Pixel 6 Pro have finally gotten on the fast charging train. Google’s usage of the USB Power Delivery PPS charging protocol, as well as its advice that you use its newest 30W USB-C converter to achieve peak rates, strongly imply as much.

However, one should never make assumptions, and it turns out that Google’s latest phones are still at the bottom of the charging time rankings.

Anyone who has used a phone will recognize the “two hours to full” notification that appears when you plug it in. Despite Google’s claims of a 50% charge in 30 minutes, completing a complete cycle takes an incomprehensible length of time.

When you look closely at the documentation, you’ll see that Google doesn’t really indicate the top connected charging speed for the Pixel 6 or Pixel 6 Pro. According to the official Google Pixel 6 support page:

We observed that the highest power received from both the Pixel 6 and Pixel 6 Pro is barely 22W, with an average of about 13W throughout a complete cycle, based on our tests with Google’s certified 30W USB-C Adapter and a couple of compatible fast charging connections. During our testing, we saw no charging speeds that came near to the 30W charging that many have (very correctly) believed the Pixel 6 series is capable of.

Although data from testing US chargers with USB PD PPS compatibility suggested peak charging of 22W or less on a US model Pixel 6, all of the adapters tested were UK variants.

What effect does this have on charging times? The Google Pixel 6 Pro takes 111 minutes to completely charge its 5,000mAh battery (5,000mAh average, according to Google) from near-empty using USB Power Delivery PPS.

Given that the Pixel 5’s 4,080mAh battery supports 18W charging and charges in about 87 minutes, this is a bit surprising. Furthermore, 22W isn’t far behind the 25W charging capabilities of the 5,000mAh Samsung Galaxy S21 Ultra, which can be charged in a little over an hour with the correct charger.

To discover this, we must examine how charging power changes throughout the course of a cycle. Fast charging often utilizes more power at the start of the charge, during the constant current phase of a battery, before decreasing power as the cell approaches full capacity.

As previously stated, the Pixel 6 Pro has a maximum power output of 22W, which is significantly below the maximum charging potential supplied by the adapter (as we’ll see in the following section).

This high power drain is maintained until the battery reaches 50% charge, which takes around 31 minutes, almost exactly as predicted.

However, following the first phase of quicker charging, the power provided to the phone drops to 15W at roughly 62 percent battery capacity or around 40 minutes. This continues constantly until it drops to barely 12W at 75 percent capacity, which takes around 53 minutes to reach.

From there, the power remains constant until 85 percent charge is attained around the 63-minute mark, at which point it progressively drops to as little as 2.5W by the time the battery is fully charged.

Charging the remaining 15% of the battery takes an inordinate amount of time, taking an additional hour to fully fill up. Surprisingly, at about 75 percent battery capacity, the phone switches back to the conventional USB Power Delivery protocol. There’s no apparent justification for this, which might be a relic of Google’s previous billing system, as we’ll see later.

In terms of a full charge cycle, the phone gets to 50% quite quickly, but the next 50% takes three times as long. The phone did not reach 35°C at its highest temperature, which is fantastic, albeit it is quickly approaching winter at the time of writing, so the outside temperature may have had a tiny influence.

Regardless, there is plenty of thermal headroom in the last stages of charging, with battery temperatures hovering around 25°C. The only other reason Google is being so cautious is to avoid overstressing a low C-Rate battery, which is quite affordable.