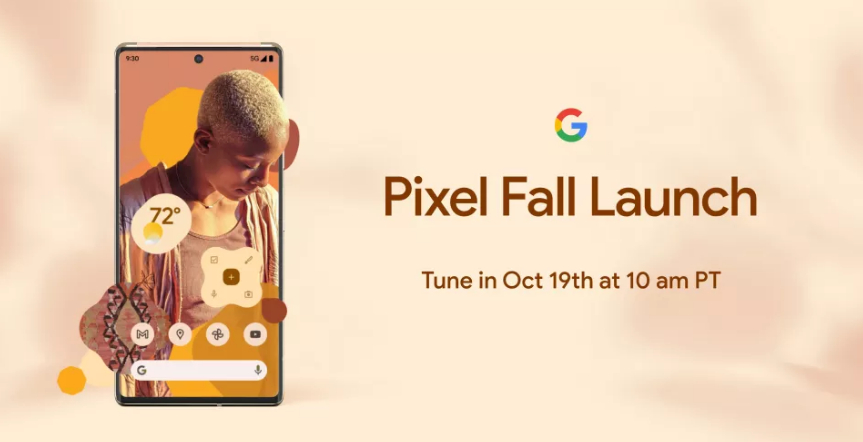 Google is finally set to unveil the Google Pixel 6 after months of leaks, speculations, and hints. The Pixel Fall Launch event, which will take place on October 19, will launch and demonstrate Google’s new smartphone vision with the Pixel 6 and Pixel 6 Pro.

It’s an exciting time for Android enthusiasts and Pixel fans since the new phones will not only represent a big shift from prior Pixels, but they will also feature Google’s first effort at its own silicon. Tensor, a new Google-built system-on-chip, is intended to push the limits of what’s possible with mobile machine learning and AI applications.

Unlike past years, this doesn’t look to be a full-fledged Made with Google event, where we’d learn about additional Google goods like Chromebooks or Nest family members. According to the event’s name — “Pixel Fall Launch” rather than anything more general — the focus this year appears to be only on the Pixel 6 and Pixel 6 Pro. Nonetheless, there is always space for a surprise or two. Continue reading to learn more about Google’s Pixel Fall Launch on October 19, as well as what could be announced during the event.

Pixel Fall Event – What is it about?

The Pixel Fall Launch 2021 event has been planned on October 19 at 10 a.m. PT / 1 p.m. ET. Google claims you’ll be able to watch it on a variety of platforms, but there’s a dedicated site up and running right now for you to check out (and revisit to watch the event live). There haven’t been any additional Made with Google events announced.

The Pixel 6 and Pixel 6 Pro will be the stars of the event. In the previous several months, we’ve heard a lot about these two phones, with Google even confirming some of the specifications directly. For example, we know that both devices will be powered by the new Tensor chip. While leaked benchmarks do not depict Tensor as a Snapdragon 888-beating monster, Google has said unequivocally that Tensor will be primarily focused on AI and machine learning.

Otherwise, the Pixel 6 and Pixel 6 Pro are significant departures from Google’s usual austere design language, as seen most recently with the superb Pixel 5a. A camera bar covers the width of the phones, with certain colors including a tri-color pattern. The rear-mounted fingerprint sensor has vanished, and it has most likely been relocated beneath the display. The front-facing camera hole-punch cutout is now centered rather than in the left corner.

The Pixel 6 will sport a 6.4-inch FHD+ display with a refresh rate of 90Hz. It will include a 50MP primary camera and a 12MP ultrawide camera. The Pixel 6 Pro ups the ante by including a 6.71-inch QHD+ display with a refresh rate of 120Hz and a third 48MP telephoto camera with 4x optical zoom. The smaller Pixel is said to feature a 4,614 mAh battery, while the larger Pixel is said to have a massive 5,000 mAh battery. The Pixel 6 and Pixel 6 Pro will be the flagship devices for Android 12, which will also have a significant aesthetic redesign.

There are various speculations circulating regarding the Pixelbook’s replacement, which was a premium Chromebook. Given the event’s name, we wouldn’t bet on Google introducing a new Chromebook or anything of the kind on October 19. Still, the firm might surprise us, but at this time, we’re just guessing and hoping.

The Pixel 6 isn’t the only phone Google is said to be developing. According to rumors, a foldable smartphone named the Pixel Fold is in the works. Furthermore, other phone leakers claim that the Pixel Fold will be released this year, maybe with the Pixel 6.

We’re not sure how plausible that is, considering how little information about the Pixel Fold has leaked — definitely not to the level that the Pixel 6 has. That’s generally an indication of a phone that isn’t quite ready for prime time.

Nonetheless, Google isn’t afraid to show off new hardware ahead of its official release. So there’s a chance we’ll see a Pixel Fold teaser during the Oct. 19 presentation. Or it’s possible that those hoping for a Google foldable phone may have to wait until next year.

Google has already stated that it is taking the Pixel 6 seriously. While prior Pixels have always been niche and enthusiast products, many people are hoping that the Pixel 6 would finally bring the phone family mainstream. It remains to be seen whether or if this occurs.

From the cameras to Tensor, we anticipate big things from the Pixel 6 and Pixel 6 Pro. While we’re just as thrilled as you are to get our hands on the new phones, we’re curious what else Google will reveal at the Pixel Fall Launch event besides pricing and availability.