Welcome to the #MekaVerse 🌐
8,888 unique Mekas who need Drivers. 🔥 pic.twitter.com/txlV5Rjyps

Matt and Mattey, two European men who have been freelance graphic and digital artists for numerous years, are the brains behind MekaVerse. Julien van Dorland, an NFT legend in his own right, is the brains behind their Discord. 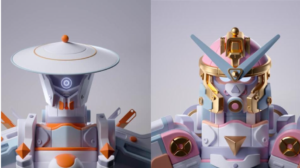 This team, together with a few siblings and friends, has attracted some of the most enthusiastic Twitter users in the NFT community, like Loopify, who quoted tweeted about Mekaverse, which is how many people first learned about the project. On Twitter, their announcement video has been seen over 700,000 times.

Talking about What exactly is a Meka? What was the creative and brainstorming process like when they came up with this idea, the team said, “We have a strong interest in the Japanese universe and anime. We spent 5 months in Asia and had a great time! We intended to establish a series of collectibles that may have enormous future potential. The Mecha world is a fantastic source of inspiration and allows us to experiment with a variety of aspects. So we began sketching and creating 3D illustrations to determine the creative direction we want. It was tough at first to claim such a wide world! But after we found our way, we began creating every element of the Meka and establishing our lore and story on MekaVerse, and it’s been a lot of work on such a large project!”

The team revealed that they were introduced to the world of NFTs in February 2021 by artists who told them it was fascinating and that the community was fantastic! ”We were able to express our originality, and collectors were drawn to our creative approach. It’s great to be able to work and simply focus on our interest” the team said.

8,888 was created in a short amount of time. The team explained that before they began working with 3D, they did a lot of research and drawings. Then we constructed our first 3D Meka by developing each element/asset. Once the project’s visual direction was completed, the team worked hard to secure the code and random management.

” We like this famous number and wanted each piece to be unique, with its color palette and design. The goal was to make each Meka unique to favor quality over quantity, which was made easy by the number 8,888!”

The goal of the project was to bring quality to the world of collectibles and to provide the NFT market with a new viewpoint.