Everything You Need to Know About Google’s Android Auto !

Like Apple’s connected-car application, CarPlay, Google has its own software for connecting Android phones to the dashboards of new vehicles. Android Auto uses a “card” metaphor to describe its new graphics and interface that shows up on a car’s LCD screen. The idea is to make it simpler for Android owners to make the car connection and use Google apps like Maps with a more attractive, more legible interface that doesn’t create additional distractions. Android Auto is trailing Apple’s CarPlay in achieving widespread introduction, but here’s what you should know now about the software.

Which smartphones are compatible with Android Auto?

Any phone running Android 5.0 (Lollipop) or later should work with the software. There will be some initial compatibility issues, as certain models from particular wireless carriers may not work with Auto at first.

How do you connect your phone to Android Auto?

As with Apple’s CarPlay, you have to use a cable; there’s no wireless-only option. To pair an Android phone with a vehicle’s Auto app, you have to plug it into the dashboard with a USB cable. When your car detects that your phone has been connected, it will initiate the Auto app and ask to update certain compatible apps, such as Google Maps. According to Google, you’ll have to pair the phone over Bluetooth to use Android Auto.

Which cars will offer Android Auto? 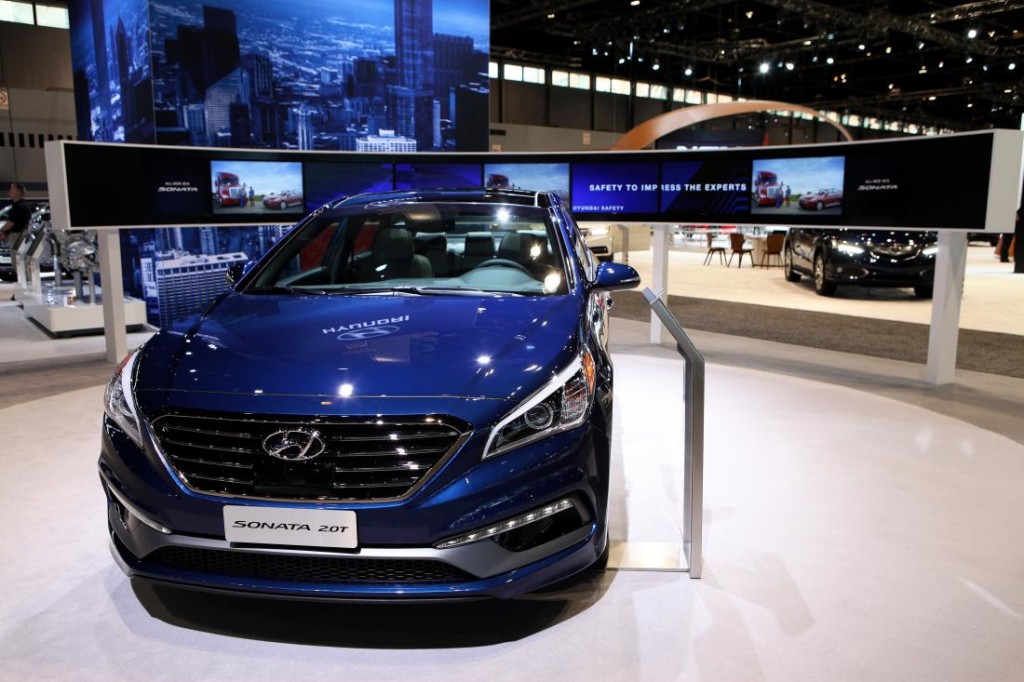 The 2016 Hyundai Sonata which is expected to have Android Auto (Image Credits: Time)

Both Apple and Google have been slow to get their software working, and many new cars that were expected to hit showrooms with the new software this spring are going on sale now — without either app. But, on the other hand, both Ford and Hyundai have shown the software in at least one new vehicle. Hyundai has promised to offer it in the current Sonata as an upgrade.

Which apps work with Android Auto?

The number of supported programs are expected to expand rapidly once Android Auto is finally released (Image Credits: Tomsguide)

There are some glaring omissions: Pandora, Radio and Yelp. The number of supported programs are expected to expand rapidly once Android Auto is finally released. However, there’s no guarantee that a given app will ever be supported in Android Auto. Like Apple, Google will control which programs are allowed to work with its Auto software.

Does Google Voice work with Auto?

Yes. When using Android Auto, drivers can ask the same questions they would on their phone simply by pushing the car’s voice button. Users can ask for directions, dial a phone number, dictate a message or get the software to play a particular artist or song.

You can navigate, but you can’t read text messages. Instead, Android Auto will dictate everything to you (Image Credits: Tomsguide)

However, like Apple’s CarPlay, voice commands apply only to apps within Android Auto. Google Voice will not control the car’s temperature or AM/FM radio. Google relies on the phone’s cellular data connection. So, if there’s no cellular service, some functions will not work. In short, you should expect the same level of functionality that you would receive on an Android phone. For instance, you can ask, “What’s the weather like in Delhi?” and Android Auto will tell you.

Both software programs are essentially just apps that appear in a car’s dashboard display. Consequently, virtually every automaker has said it plans to support both Apple and Google in the future. However, because both Android Auto and CarPlay require different cables to connect to the dashboard, cars that are compatible with both systems will probably require at least two different USB inputs. The car companies also will continue to support their own apps, so, for example, you don’t have to use Android Auto to play streaming music. Car companies like Hyundai have said they’ll continue to support additional apps on their own so that drivers are not limited to Apple or Google. Furthermore, many car companies, such as Ford and Toyota, already have an extensive list of apps that work with Android phones, so drivers don’t have to switch if they don’t want to.

More importantly, most automakers are including their own built-in navigation software, which works without a connected smartphone or cell connection (and, consequently, tends to be faster than phone-based navigation). At least one automaker, Toyota, has admitted that it’s in no rush to support Android Auto or CarPlay.

Will Android Auto take control of the dashboard?

No. As with Apple’s CarPlay, you cannot use the Android Auto app to select radio stations, turn on cruise control, or adjust the A/C in the car. To change the temperature, for example, drivers will have to use the usual heating and ventilation buttons or the car’s own, separate voice-recognition system. There is some basic level of coordination between the Android Auto app and the car, however, so that streaming music playback will be muted when a lane-departure warning bell sounds, for example.

Can I add Android Auto in the car I already own?

Automakers are not certain whether any of their current connected-car systems can be upgraded to use Android Auto in the future, but most say they won’t be. The one exception is Hyundai, which has said its current 2016 Sonata should be upgradable. But, a company representative stopped short of guaranteeing that it would work in the future. However, the existing car stereo or navigation system can be replaced by purchasing a new in-dash infotainment system that works with Android Auto. The first system to work with both Android Auto and CarPlay is an aftermarket model from Pioneer, the $1,400 AVIC-8100NEX. It has two USB ports — one that works with Android phones and another for iPhones. Drivers can plug both phones in simultaneously and switch between phones and their supported apps via the settings menu.  Kenwood also has demonstrated an infotainment model that supports both Android Auto and Apple CarPlay, but it is not available yet.

When will Android Auto be available?

Most car companies want to support Android Auto, but official launch dates have not been released. At least a few new 2016 models are expected to include the software.

Check out the video !