Facebook is the most recent in a long series of so-called “social networking” websites. Its popularity, however, sets it apart from the competition. 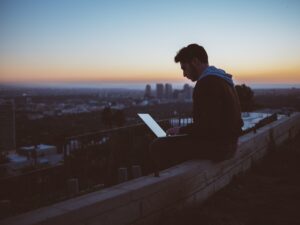 Facebook is a social networking service that allows users to interact with friends, coworkers, and strangers online by creating free accounts. Users may share photos, music, movies, and articles, as well as their own ideas and opinions, with as many people as they choose.

Users can send “friend requests” to individuals they know or don’t know.
When both profiles are accepted, they are linked, and both users may view what the other person publishes. Facebook users may publish practically anything to their “timeline,” which is a snapshot of what is going on in their social circle at any given time, and can also engage in private discussion with other online acquaintances.

Those that continue to utilise it do so for the sake of social networking. Because teenagers are great multitaskers, using Facebook, like any other social networking site, is practically second nature to them. Young individuals can experiment with who they are by using social networking platforms. They’re popular because they allow teenagers to express themselves in an unfettered manner online, which they may share with their peers.

You may post an infinite amount of images to your Facebook page to share with coworkers, clients, or friends. The default privacy settings on the social networking website make all of your submitted photos visible to all of your friends, which isn’t always optimal.

The Audience Selector feature on Facebook allows you to conceal photos so that only you can see them. Many users take advantage of this function to take advantage of Facebook’s limitless photo storage, which works similarly to a cloud service. You may also conceal photos from certain individuals, which is useful if you want to keep your personal and professional lives distinct on Facebook.