How to mine Bitcoin at home

Since the previous few years, if not a decade, the word cryptocurrency has gotten a lot of attention. The world is fixated on its ups and downs, and it has become an obsession. People have begun to explore various routes to become a part of this digital revolution as their interest in the issue has grown. 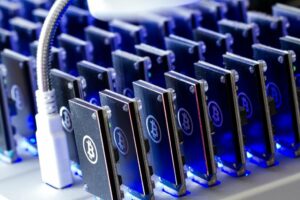 Bitcoin is a decentralised digital currency network in which transactions are performed to and from a 16-character encrypted address (the crypto equivalent of a social security number). These addresses are mathematically protected, ensuring that only the address owner may transfer funds to it ( the two-factor verification).

Bitcoin is a network of independent computers that generates, propagates, and verifies monitory transactions in simple terms.

Mining enables users to get control of cryptocurrencies such as Bitcoin without having to buy them. Mining, on the other hand, is one of the most volatile elements of the crypto-world, and it comes with its own set of difficulties.

Mining is the process of adding transaction records to Bitcoin’s (BTC) public ledger, known as a blockchain, by producing valid blocks. It is an important part of the Bitcoin network since it eliminates the so-called “double-spend problem.”

Mining using laptops is no longer economical, therefore constructing an ASIC, or application-specific integrated circuit, is the best way to get started nowadays.

The “rig” is just a computer that has been modified. A rig has all of the standard PC components, including a motherboard, CPU, storage, and RAM. When it comes to graphics cards, things differ from the standard for personal computers.

For mining, you’ll need a decently powerful GPU, and you’ll probably need more than one – a lot more than one. A mining setup can be made up of a low-cost PC with strong GPUs.

Multiple graphics cards will need to be connected to a single system. If you want to go to the extremes, you’ll need more than one power supply unit and a high-performance motherboard.
You may also add an ASIC to the computer to increase its processing power, which again will push up the price.

After you’ve gathered the necessary gear and built a setup. You’d need to set up a digital wallet to hold Bitcoin rewards (either through ASIC or GPU). They allow you to manage your Bitcoin addresses, which have two keys: one private and one public. Remember that if you lose your private key, you won’t be able to get your Bitcoins back. To accept payments, you must send your public key, which functions similarly to a bank account number.

You may choose from a variety of Bitcoin walkers, including as Coinbase, Ledger, or SoFi.

In today’s world, even the finest individual rigs are finding it difficult to compete with these massive mining farms, therefore you’ll need to join a mining pool. This will increase your chances of profit, but keep in mind that the benefits obtained via pooling will be shared among all members who participated to the joint venture.

Slush pool, BATPOOL, 1Hash, and AntPool are some of the most popular mining pools.

Get a mining software for your PC

Now is the moment to download and install a legitimate Bitcoin mining software, such as EasyMine, GUIMiner, or CGMiner, on your computer.

The mining software establishes a connection between you and the clients as well as the Bitcoin and blockchain networks. The software’s role is to accept Bitcoin orders, gather completed results (proof of work), and upload all of this data to the blockchain network. The mining software also monitors the mining process and displays information like as hash rate, temperature, cooling, and average mining speed.

After you’ve installed the software, you may begin mining for Bitcoins and generating income. Once you’ve started the cycle, the mining software will interact with the pool servers to coordinate your machine’s mining efforts with those of the other machines in the pool.