How to register for PUBG New State Alpha Test

Recently, Krafton Inc. officially announced the release of a new PUBG title for the mobile devices under the name of “PUBG: New State”. The leaks seemed to suggest that an official trailer, along with announcements about other aspects of the game, would be released this week. Furthermore, we will finally have a first look of the game as well as the relevant details required for pre-registration. 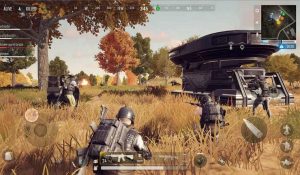 PUBG: New State is the second mobile title that has been developed by Krafton. According to several rumours, the game was in development hell, something which was later confirmed by the Executive Producer of the company in an interview with Bloomberg L.P. PUBG Mobile has found tremendous fame and success since the game was launched back in late 2017, and now, a potential successor has been announced by Krafton.

A new website for PUBG: New State is live and includes information about the process of pre-registration, as well as the official trailer of this game. Social media handles of the emerging titles on various networking sites are also highlighted on the official website. The information about PUBG: New State has also been provided on its search result page on Google Play Store.

A new variety of tools and features have been added, including drones, combat rolls, etc. Users can explore a massive 8×8 km open worlds with a variety of vehicles, and utilise a wide variety of weapons in order to swing the battle in their favor for a more immersive battle royale experience.

Furthermore, it is set in the near future, 2051 to be precise. As a result, the first look depicts a similar story. Although some of the guns and equipment look similar, the intricacies have been majorly altered.

The normal holographic sight will now have a more technically advanced look.The vehicles have been upgraded to correspond with this futuristic theme. The map looks slightly different, but some famous buildings and areas from Erangel have been maintained. Some new equipment, such as UAV and Shield Walls, are also added to the new game.

The pre-registration process has already started and those who enroll within a given time period will receive a permanent vehicle skin for free. Unfortunately, the registration process is not yet available in India and has only begun in a few countries. Overall, this game looks very promising and has the potential gain popularity as a more advanced version of PUBG Mobile, and might even manage to surpass its highly celebrated predecessor.

To register for the new PUBG game, use the following steps: