Yesterday, for a while, some Facebook users could see the light, and they were not pleased about it.

A significant number of users are took to social media on Wednesday to report that they are no longer being able to access the dark mode on Facebook. Dark Mode is the kind of view that replaces the white interface with a dark background, which some people find easier to read. Besides that, it can also consume less battery life due to the darker shades and use of less light.

On Wednesday evening, Twitter was flooded with users complaining about the fact that Dark Mode was not available on Facebook. Most of the tweets that noted the absence of Dark Mode began to appear at around 5 pm E.T on Wednesday.

However, there is no need to panic, because Dark Mode has not disappeared from people’s phones. Staffers from some publications were surveyed, and everyone who was part of these surveys has been able to turn on Dark Mode on their Android devices or iPhones.

According to a spokesperson from Facebook, the company is aware that some people are having trouble accessing certain features on Facebook’s Android app, and they are working to get things back to normal as soon as possible.

Shortly after midnight today, Facebook gave an all-clear signal. They have restored services for those who experienced a technical issue that caused some people to have trouble accessing certain features on Facebook’s Android mobile application.

If you do wish to activate the Dark Mode on Facebook, you can do so by tapping to the hamburger icon menu in the mobile application, choosing Settings & Privacy, and going to Dark Mode. 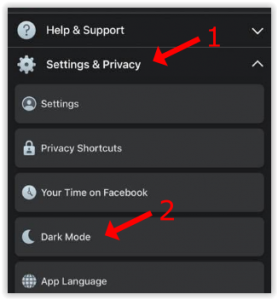