Augmented Reality (AR) and Virtual Reality (VR) have been instrumental for research and development in various fields. Augmented Reality devices help the users to visualize a phenomenon by incorporating digital elements in a physical world. Whereas Virtual Reality headsets provides its users with a complete digital immersive experience. Both are considered to be extremely important especially when it comes to learning and training.

AR and VR are now being utilized in various sectors due to their ability to substitute for the resources involved when it comes to depicting visuals. This has proved to of great help for the companies who believe in conservation of resources.

Working along the same lines, Bendangtoshi T Dominica Jamir studying for Masters in User Experience (UX) and User Interface (UI) at the New York Technical Institute, has developed a web based platform which is able to enhance traditional learning by employing Virtual Reality (VR).

Bendangtoshi T Dominica Jamir always hoped to reduce the gap between modern technology and its everyday users. Speaking about this she said, “New York City was the logical step for me to expand my career and challenge myself to achieve extraordinary levels of excellence in the AR/VR, (Augmented Reality/Virtual Reality) UX/UI arenas.”

She further added that, “VR-learning can be a boon for students limited by socially distanced education as well as for global remote learners – as long as they have reliable internet. It appears inevitable that this burgeoning, relatively new VR technology becomes mainstream in our daily lives.”

With that being said, Jamir also added that there is a need to enhance the amount of awareness amongst people regarding education with VR. People also need to be made aware about its benefits and the value that it adds.

Along with other sectors, the educational sector is also changing. This sector has been incorporating tech more and more in the learning process. Though the pace is slow, it surely does leave its impact.

Mariela Damaris Urzua Reyes has developed an app which uses elements of Augmented Reality (AR) to help the students learn about chemistry concepts. This app allows students to study and understand various concepts of chemistry such as observing and analyzing molecules up close and to also look at them from different angles.

Mariela Damaris Urzua Reyes when speaking about the app said, “We developed an app for chemistry class in which my students can visualize the hybridization process of carbon, the form that hybrid orbitals take, and how the single, double and triple bonds of hydrocarbons are formed.” 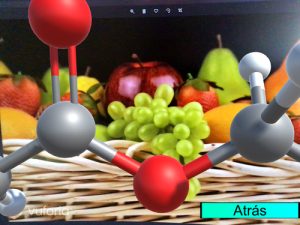 She further added that with the help of AR one can transform the classrooms into learning environment which allows students to explore and discover the unknown. With the help of technology students can now visualize the atoms and the molecules in a much better way and can thus understand the concepts better.

Augmented Reality and Virtual Reality have been proven to be a two very important technological aspects which have helped many researchers worldwide to come up with ground breaking discoveries. Having incorporated it into education system will ensure its access to students, especially due to the classes being shifted to online medium.