Jamie Dimon calls Bitcoin “Worthless” Dimon, who has been a loud critic of Bitcoin in the past, said, "I personally believe that Bitcoin is worthless."

Jamie Dimon, the CEO of JPMorgan Chase, has already stated that he is not a fan of Bitcoin and has now restated his stance on the world’s most popular cryptocurrency, calling it “worthless”.

Many skeptics appear to have been quiet by Bitcoin’s good performance in recent weeks, but Dimon is a firm believer in cryptocurrencies as a serious investment. Governments will regulate cryptocurrency as an asset class, according to Dimon, and this regulation is important. 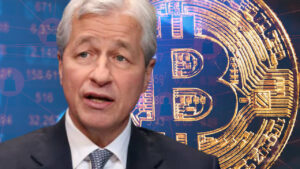 At a conference on Monday, Jamie Dimon stated that governments will control cryptocurrencies and that he believes Bitcoin is worthless.”Whatever anyone thinks about it, the government will regulate it. They’re going to regulate it for (anti-money laundering), (Bank Secrecy Act), tax, and other reasons “In a virtual conversation with the Institute of International Finance, Dimon mentioned banking rules.

Dimon, the CEO of the country’s largest bank, has been a prominent critic of the digital currency, initially branding it a hoax before later apologizing. JPMorgan granted wealth management clients access to cryptocurrency funds this summer, allowing the bank’s financial advisers to take buy and sell orders for five bitcoin products from clients.

Dimon expressed his skepticism, stating that his opinions differ from those of the bank and its board of directors. “Bitcoin, in my opinion, is worthless,” Dimon remarked. “I also don’t believe you should smoke cigarettes.” “Our customers are all grownups. They are at odds. We can’t custody bitcoin, but we can provide them lawful, as clean as possible access if they want to buy or sell it.”

Many individuals reacted to Dimon’s statement about BTC supply on Twitter. Some people expressed surprise that Dimon made the above statement, while others posted the code for the JPMorgan CEO to view.

Brian Armstrong, Coinbase CEO tweeted: “Yes, I read it. And then I wrote it (coding up our own Bitcoin node) to make sure I understand it.”

And then I wrote it (coding up our own Bitcoin node) to make sure I understood it. https://t.co/yg46xyvkMq

“So strange,” Galaxy Digital CEO Mike Novogratz said. His responses about BTC are sophomoric for a man who has done a fantastic job operating a massive bank, and he keeps doubling back on them. I hope to remain open-minded for the rest of my life”.

So strange. For a man who has done a brilliant job running a giant bank, his answers around $BTC are sophomoric and he keeps doubling down on them. I pray I stay open minded my whole life. https://t.co/d4rJpUFGKH

“Never attribute to malice that which is adequately explained by stupidity,” stated Shapeshift founder Erik Voorhees. “Even the world’s wealthiest, most powerful people are clueless on Bitcoin,” venture capitalist Stephen Cole said. Bitcoin prices did not react to Dimon’s remarks right away. The cryptocurrency was last trading at $57,304, up 5% on the day.