According to recent reports, as labor shortage is causing hiring problems, Amir Rahim, owner of Grounded Coffee and Kitchen Bar decided to automate most of the parts of his restaurant. Read the entire article to learn more about this news piece.

About the decision to automate most parts

“I’ve changed my mind completely now,” said Rahim, the owner of Grounded Kitchen and Coffeehouse in the city’s downtown. “It makes a really good product and, actually, makes a better product than a human and all you have to do is push a button.” I’m using an automated process because it solves the challenge of finding people to do the job,” he said.

“We are in excess demand, where the economy’s need for labor is outpacing its ability to supply it,” Bank of Canada governor Tiff Macklem told an audience at the Public Policy Forum in Toronto on Nov. 10.`

“It’s really difficult to find staff to do a job that, quite frankly, nobody wants to do anymore,” Rahim said of food service gigs.“There are a lot of people that talk about automation being a bad word because it takes away people’s jobs. The reality is no, if people wanted this job, I wouldn’t have a problem hiring staff.”

Stephen Tapp, the chief economist at the Canadian Chamber of Commerce, said that broadly speaking, the country’s companies should automate more. “If you look across the G7 economies, you look across the OECD — so that might be a group of more like 36 economies — Canada’s productivity performance has been pretty abysmal over the last two decades,” Tapp said

“The unemployment rate in June hit a record low — and while that seems like a good thing, it is not sustainable. The tightness in the labor market is a symptom of the general imbalance between demand and supply that is fuelling inflation and hurting all Canadians,” Macklem said. 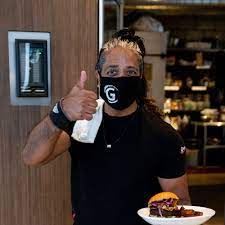 Why did he decide to automate most parts of his restaurant?

“For $15.50 an hour plus tips, you want someone to wake up at 5:30 in the morning and show up at 6:30 and sling a bunch of coffees for a bunch of grumpy people on their way to work that they don’t want to go to? You can’t find those people,” Rahim said. “They don’t want to do it. And it’s so tedious. It’s hard on your wrists. It’s messy. It’s hot. Nobody wants that job.

“I wanted to automate in order to pay good people enough money and still be profitable.”