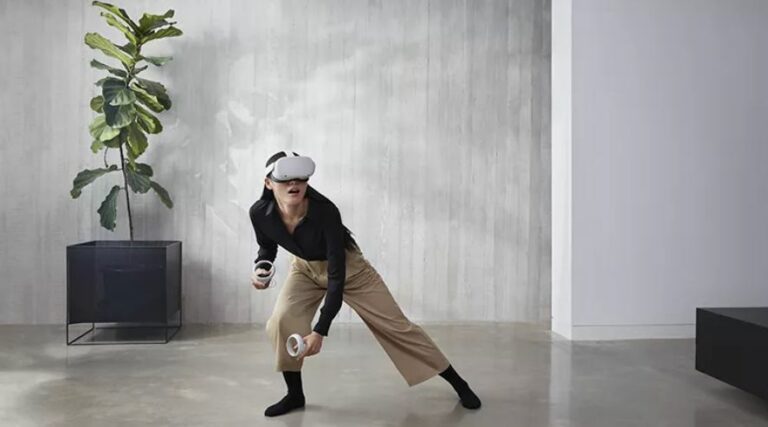 While most of the finest VR headsets can only capture head and hand motions, the Oculus Quest 2 and future Oculus hardware may soon alter that. The much more recent edition of the Software Development Kit (SDK) – a set of tools meant to assist the platform’s game and app developers – contains an option for ‘body tracking capability,’ as spotted by Upload VR.

There has been no official announcement from Meta (previously Facebook, the company that owns Oculus) about this function, and the company declined to comment when approached by Upload VR, thus the specifics of its implementation remain unknown.

The ability to monitor a user’s hands was introduced to the Oculus Quest via a software update in late 2019, therefore the Oculus Quest 2 might get a similar treatment with body tracking capabilities.

If this is the case, it is unclear how body tracking would work. The Quest 2 does have a pair of wide-angle, downward-facing cameras, but when gazing down, its field of view would only cover the front of a user’s chest and legs.

Another option is that the functionality is meant for the Oculus Quest Pro (AKA Project Cambria), a high-end virtual reality and augmented reality hybrid headgear scheduled for delivery in 2022 by Meta. While we don’t know which device will support body tracking or when it will be available, this recent leak strongly hints that it will be available soon on an Oculus device.

The ability to capture a user’s whole body movements would provide a great lot of adaptability in the VR environment, whether it’s for fitness applications that can track specific motions or more precise avatar movement in the virtual realm.

Although virtual reality is not yet ubiquitous, 2022 is already shaping up to be an important year for new virtual reality (VR) and augmented reality (AR) headsets, thanks to the great success of the Oculus Quest 2. One of the most significant new announcements is likely to be about Project Cambria, a headset now under development by Meta (formerly Facebook) that will build on the success of its Oculus product line.

This would set it apart from the Oculus Quest 2 (and, eventually, the Oculus Quest 3) as a device geared at and priced for the pro and enthusiast end of the mixed-reality market. Project Cambria is likely to represent the leading edge of what’s now achievable in wireless virtual reality, free of the pricing limits that prior Oculus headsets were hamstrung by as Facebook / Meta sought to demonstrate an interest in mainstream VR adoption.