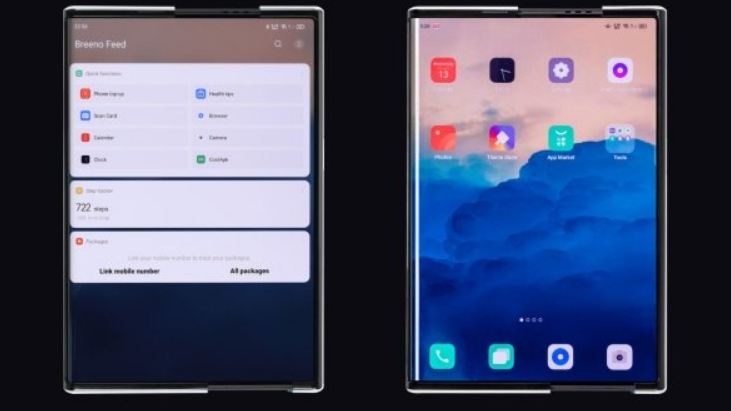 Just a few months ago, Oppo off a folding smartphone prototype to the globe. It appears that the corporation is now ready to release the smartphone in order to compete with companies like Samsung and Huawei.

As of now, Samsung and Huawei are the only major smartphone manufacturers with foldable smartphones in their lineups.

This is about to change with the release of the Oppo Folding Smartphone (Oppo X 2021), which will be powered by the most powerful Qualcomm CPU.

Oppo, on the other hand, employs rolling display technology, in which the display grows inside itself at the touch of a button. This will be comparable to the prototype folding smartphone that Oppo recently demonstrated, but with a few tweaks to make it ready for real-world use.

According to the specifications, it has a rolling 120Hz OLED display with a staggering 2K (QHD) resolution, putting it on par with other folding premium smartphones.

Oppo is likely to utilize a plastic-made screen protector with a little of glass infusion to boost scratch resistance given the type of display.

The Oppo Folding Smartphone will be powered by the Qualcomm Snapdragon 888 SoC. The smartphone will most likely launch with the Android 12 operating system, with a bespoke ColorOS 12 layer on top.

A 50MP main camera sensor is also claimed to be included in this one-of-a-kind kit, which is expected to offer 8K video recording capacity.

The Oppo Folding smartphone will be powered by a 4,500 mAh battery, and Oppo’s unique 65W charging will also be there.

Overall, the Oppo Folding Smartphone appears to have an advantage over other folding smartphones on the market. However, the handset is believed to be one of the most costly smartphones from Oppo, a smartphone firm owned by BBK Electronics.

When will Oppo Foldable launch?

The Oppo Folding Smartphone is expected to be released in China next month. However, there is no information about the worldwide availability of the same as of yet.

Because of the worldwide chip scarcity, Indians may have to wait until 2022 to experience Oppo’s first commercial folding smartphone and the world’s first rolling display smartphone.

This is most likely the one question for which we don’t have a definitive answer. We don’t know how long this gadget will live because it’s a one-of-a-kind folding smartphone with a unique rolling display mechanism. Again, this is something that applies to all cellphones, particularly those with moving parts.

If you are an enthusiast, attempting to import a gadget such as the Oppo Folding smartphone is especially problematic because you will be unable to service the device or even purchase genuine components.

Even if the item is officially released in India, it may only be accessible in limited quantities and would be offered on a first-come, first-served basis.

Oppo Foldable Smartphone may launch next month in China.