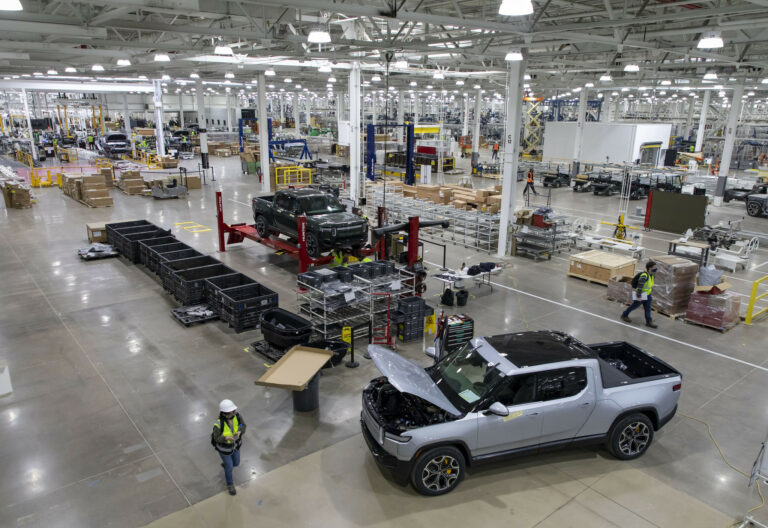 Rivian opened its production plant for visitors. Many Rivian pre-ordered customers are interested in the factory tour. Originally it was known that Rivian offers on-site delivery without a delivery fee and also provides a “factory tour” during this visit. Recently as the deliveries were delayed, Rivian started accepting tour visits. Some videos are shared by Rivian Forum Member, Ducktruck.

Ducktruck visited the production plant last week. It looks like a busy plant, where any new visitor could easily get lost in the 3.3 million square feet of land. Interestingly it wasn’t just the one who was taking the video who visited the plant. There were a few others who seemed to enjoy the tour.

The car body in the making can be seen, and the doors which were once shared by the CEO RJ Scaringe were also there. Furthermore, the 4,800-tonne press machine was used to make the doors. There are various machines and the tour guide says that the production plant would be much noisier when it is in working condition. It may seem like the tour guide didn’t want to reveal more details. Also, it is obvious because the deliveries haven’t started.

As they were passing through door panels, the guide told that they roughly make a door panel every four seconds. We can also see a group of workers discussing and taking the door panel out after the production. Everything seems to be going on at a faster pace, as much as possible. In July Rivian’s CEO emailed all the pre-ordered customers, explaining the reasons why there is a delay in deliveries.

As Rivian plans to focus on customer experience in its best form, a factory tour seems like a better option as the vehicles are not delivered yet. It is a huge plant and there are many other things to explore in the factory. But only a few are shown in the videos detailedly. Later when the car stopped at body panels, the guide seemed to talk about contraption. But the canopy of the production ended what the guide was about to say.

Additionally, in between the Rivian guide said, “You’ll get the whole paint experience. But what you’re referring to is electro-deposition. That’s for environmental protection.” Though the tour was limited, they gave an honest response and told that Rivian is not yet at the stage for electro-deposition.

This is not the only thing Rivian is doing for its customers. Recently a video was released showing that many pre-ordered owners got to test drive the R1T prototype. Looks like Rivian is keeping up with the vibe before the deliveries start.