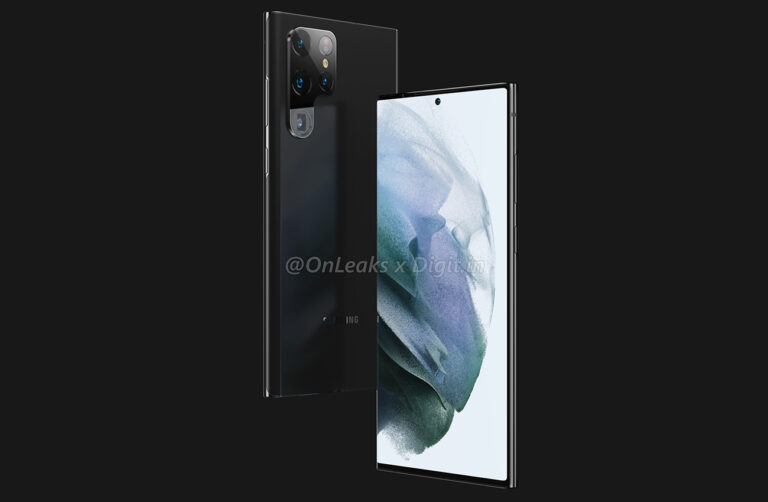 The introduction of the Samsung Galaxy S22 lineup is still a few months away. The new Samsung flagship smartphone series is likely to be launched sometime next year. Samsung normally debuts its Galaxy S flagship series in January or February, and many predict the same for the S22 lineup. The S22 series has yet to be announced by the company. It’s evident, given that we’re only about four months away from the launch.

The Galaxy S22 Ultra is likely to undergo some noticeable changes, according to renowned leakster OnLeaks. The other models, on the other hand, may not provide much freshness. According to the leaked renders, the Galaxy S22 Ultra might be the absolute successor to the Galaxy Note 20 Ultra, which may satisfy Note enthusiasts. This suggests that the S Pen will most likely be considered as an integrated entity rather than a standalone accessory that may be excessively overpriced for many.

The phone is also rumored to portray a new aesthetic with flat corners and a unique-looking P-shaped rear camera bump. It’s believed that there will be four rear cameras. A punch hole is noticeable at the top center of the display. It will most likely feature a 6.8-inch curved AMOLED screen with a high refresh rate,  which is likely to be up to 120Hz as well as the unannounced Qualcomm Snapdragon 898 SoC. Improvements are expected in the camera, battery, and other areas, although details are unknown as of now.

The camera sensors’ specifications for the other three rear cameras are unknown. According to OnLeaks, the device would include a periscope camera lens. The other three sensors are expected to have wide, ultrawide, and telephoto zoom shooting capabilities. The S21 Ultra, for example, featured two telephoto camera sensors with 3× and 10× optical zoom, a main camera, and an ultrawide sensor.

All Samsung Galaxy S22 devices are expected to have faster-charging speed in comparison with the current Galaxy S21 lineup along with top-of-the-line features. Although the details are conceptual at this point, we should take them with a grain of salt until we get an official announcement. More information will be provided as it becomes available, so stay tuned with us.