Startup Grind hosts Ramaraj, the co-founder of Sify, an active angel investor, and an advisor to several venture capital funds.

Come meet him, and learn how to scale your business, what investors are looking for, how to pitch to an investor, and more! The event is happening on 21st September at 6.30 pm at IIT Research Park (Behind Tidel Park).  Grab your tickets here ! 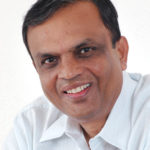 R Ramaraj is a serial entrepreneur and his last venture was Sify, where he was the Co-Founder and Chief Executive Officer. He was recognized as the ‘Evangelist of the Year’ at the India Internet World Convention in September2000 and was also voted the IT Person of the year 2000 and in 2001, in a CNET.com poll in India.

In 2010, The Confederation of Indian Industry (CII) recognized him with a Life Time Achievement Award for nurturing the Spirit of Entrepreneurship and inspiring and mentoring numerous entrepreneurs.

Until recently he was the Senior Advisor at Sequoia Capital. He is currently Senior Advisor at Elevar Equity. He was a Member of the Board of Governors of the Indian Institute of Management, Calcutta 2010-2015

He is the first Indian to be invited to the Board of Directors of ICANN (Internet Corporation for Assigned Names and Numbers) where he served for 6 years as an Independent Director. He was a member of the Global Board of Trustees of TiE (The Indus Entrepreneurs).