Rocksteady returned to the DC FanDome to unveil a brand new story trailer for Suicide Squad: Kill The Justice League. Gotham Knights debuted at the venue last year, and now the 2022 Game from Warner Bros. Games Montreal is bringing the cold back into the hall of heroes with a stunning new trailer showing the game’s biggest antagonist, the Courthouse. 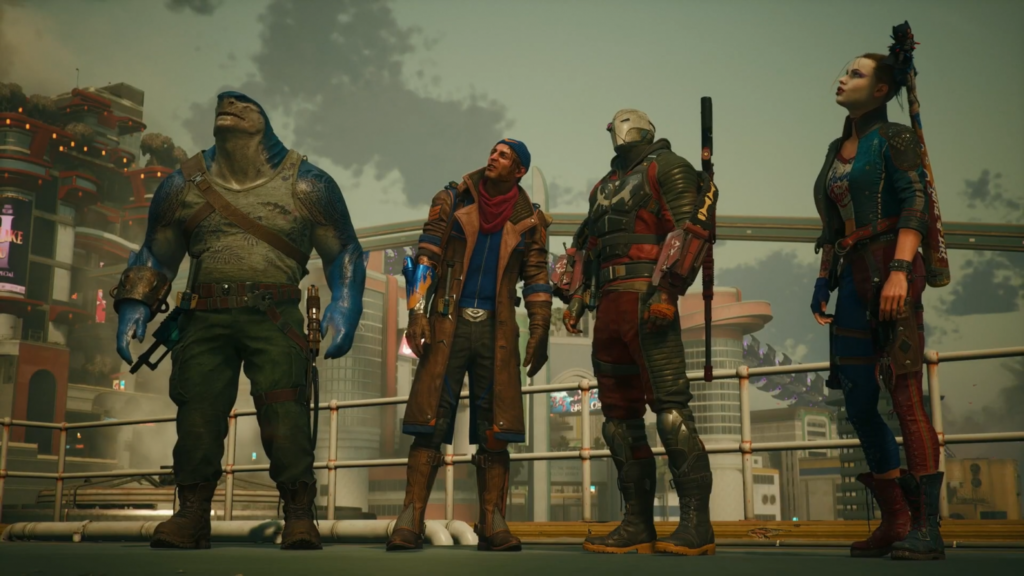 Rocksteady Studios, the team behind Batman’s: Arkham series is reported to be working on a new Superman and Suicide Squad game. The first trailer doesn’t tell us much, except for the fact that Task Force X is dealing with the Justice League, and there seems to be a Brainiac-driven version of Superman that appears at the end. It is confirmed that the game will take place in the same universe as Rocksteady’s Batman Arkham games.

Deadshot, Harley Quinn, Captain Boomerang, and King Shark survive an army of hostile aliens as they take on some of DC’s greatest heroes, including Batman, The Flash, Green Lantern, John Stewart, Wonder Woman, and Superman, who all appear in the trailer at different points. Suicide Squad will be released in 2022 for PlayStation 5, Xbox Series X, and PC. The new trailer gives a look at a brainwashed version of Wonder Woman, Superman, The Flash, and Green Lantern. We also see a version of the Batmobile that hints at an appearance by The Dark Knight in Rocksteady.

It will offer an open-world metropolis that players can explore, much like the Arkham games. The trailer does not contain gameplay but gives us an idea of what we will do when the game arrives in 2022, so there is no doubt that there will be more. The game takes place in Batman: Arkham Universe and allows players to control Harley Quinn, King Shark, Deadshot, and Captain Boomerang. In solo mode, players will be able to switch between characters anytime, while the rest of the characters will be controlled by A.I.

Suicide Squad: Kill The Justice League is an upcoming action-adventure game released by Warner Bros. Interactive Entertainment and developed by Rocksteady Studios. It has been confirmed that the game will take place in the previously mentioned Arkham universe. Along with Rocksteady’s Suicide Squad, Warner Bros Games Montreal is continuing the Arkham-style Gotham Knights adventure, originally planned for 2021 but postponed to 2022.

The trailer shows a fight between Justice League members and Arsenal that ends with Task Force X. Amanda Waller is said to be under the mental control of Superman and has become an alpha target, but it’s unclear if the entire Justice League cast will be killed in Suicide Squad. The trailer shows that the game will come in 2022, but doesn’t reveal an exact date.

When Waller booms a loudspeaker announcing that the squad is destroying the Justice League we get a glimpse of the evil versions of The Flash, Green Lantern Hal Jordan, and of course, the evil Superman. The Flash appears in the latest story trailer, with purple veins all over his face and bright eyes. The penguin appears again, and the members of the suicide squad seem to enjoy killing him with electric shocks.

The first trailer showed Brainiac attacking Metropolis and a government task force called the Suicide Squad (Harley Quinn, Tara Strong, 7, Captain Boomerang, Deadshot, King Shark, and Samoa) sent to investigate and kill Alpha, the target. Staying true to the Suicide Squads’ theme of thrill, the new trailer gives us our biggest insight yet into the story, characters, and tone of the game, as well as a debut commentary by the peacemaker himself, John Cena. The trailer opens with the Suicide Squads getting their chips injected at Arkham Asylum.

On Saturday, DC Comics and Warner Bros. held their annual DC FanDome and revealed new trailers for films and series that will release in the near future, which included Batman, The Flash, and Black Adam. Matt Bomer entered DC’s Hall of Heroes and announced that HBO’s original series Doom Patrol will return for a fourth season and showcased a strange new midseason trailer.

DC FanDome 2021 was filled with a lot of interesting stuff, and there’s a lot of good news for fans of superheroes. The new DC – home for DC – fans give us a taste of some of the biggest DC movies, television shows, games, and comics to come out next year. While Dwayne Johnson’s Black Adam was in development for many years, the Black Adam Teaser Trailer features not only Johnson’s character but also several members of the Justice Society of America making their debuts. We also get to see the blue beetle suit from the film for the first time, which is a smart piece of conceptual art. Fans will have to wait until the next trailer to learn more about the actual style of play.