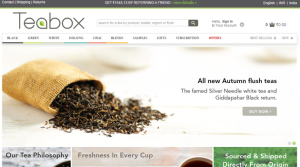 Founded in 2012 by Kaushal Dugar, Siliguri-based Teabox  is a premium tea brand delivering tea all over the world, focused on the vertical integration of sourcing, branding and distributing teas. The company works with around 150 plantations in Darjeeling, Assam, Nilgiri & Nepal.

Kaushal Dugar, Founder & CEO, Teabox said, “This capital will give us additional resources to expand quickly and strategically into new markets, innovate rapidly, and deliver on our vision around the world.”

Within four years of its existence, Teabox has delivered over 35 Mn cups’ worth of tea to customers in 94 countries. Teabox will use the capital infusion to expand its presence and fuel growth and innovation in global markets.

With this, Teabox has also announced strategic hires . Nicole Naumoff, with over 20 years of marketing and business leadership experience with global brands has joined Teabox. Nicole will lead Teabox’s marketing efforts including the launch of new products and partnerships, with a focus to build the brand in North America.

Amit Sharma will lead technology at Teabox. His strong understanding of usability, scalability, performance and optimisation will ensure the Teabox e­commerce platform is ready for growth.

Prior to this in January 2016, Ratan Tata invested an undisclosed amount of funding in Teabox, an online startup that sells premium teas.

Prior to this, the company had raised $6 Mn in Series A funding from JAFCO Asia, Keystone Group and Dragoneer Investment. The round also saw participation from Accel Partners and Texas billionaire Robert M. Bass.