Originally planned to start deliveries by the fourth quarter of 2021, Tesla Cybertruck deliveries are to start by 2022. It was changed in the website, which possibly came as a result of ongoing challenges like chip shortage and supply chain pressure. The delay was known all along on multiple occasions. In the Q2 earnings call, Tesla’s VP  Lars Moravy mentioned that Cybertruck will be in the beta phase by the end of 2021. 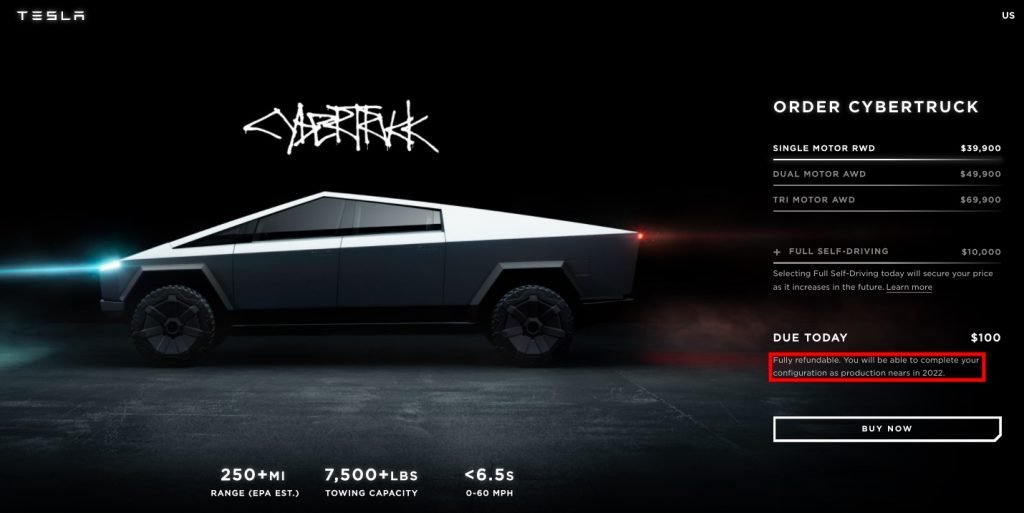 Meanwhile, Tesla’s competitors are also experiencing a delay. Rivian initially planned to start deliveries by July but pushed the date to September. While most of them are experiencing a delay, General Motors felt confident in July about releasing their first electric pickup first.

Moravy said in the second earnings call, “The Cybertruck is currently in its alpha stages. We finished basic engineering the architecture of the vehicle. With the Cybertruck, we’re redefining how a vehicle is being made. As Elon said, it carries much of the structural pack and large casting designs of the Model Y being built in Berlin and Austin. Obviously, those take priority over the Cybertruck, but we are moving into the beta phases of Cybertruck later this year, and we will be looking to ramp that in production and take it to Texas after Model Y is up and going,”

Cybertruck is to be manufactured in Tesla Giga Texas. Recently Cybertruck’s steel supplier factory, Steel Dynamics Sinton was also observed to have made progress. Along with Giga Texas, everything seems to take go accordingly as planned with a little delay. In recent months, there were some patents filed by Tesla, including bulletproof armor glass and solar panels. Various changes are being made to the truck, especially considering that many details are not known yet, there is no information on how the final product will look.

Currently being featured in a mobile game, PUBG Mobile, the Cybertruck is known to have more than 1 million reservations. The popularity keeps increasing as the delivery date comes near. Tesla’s other upcoming product, Tesla Semi is also seen to be progressing as some documents about wireless charging were seen.