The brand new Tesla Model S Plaid caught fire, and the owner says it was completely spontaneous. Information was conveyed through his lawyers, Mark Geragos of Geragos & Geragos in Los Angeles, and Jason Setchen of Athlete Defender in Miami.

Furthermore, the fire took place on 29th June in Haverford, Pennsylvania. Details regarding the owner haven’t been revealed. First, the owner noticed smoke coming from the car, and then the fire started. He says that he didn’t do anything to cause such a fire, and it was spontaneous. 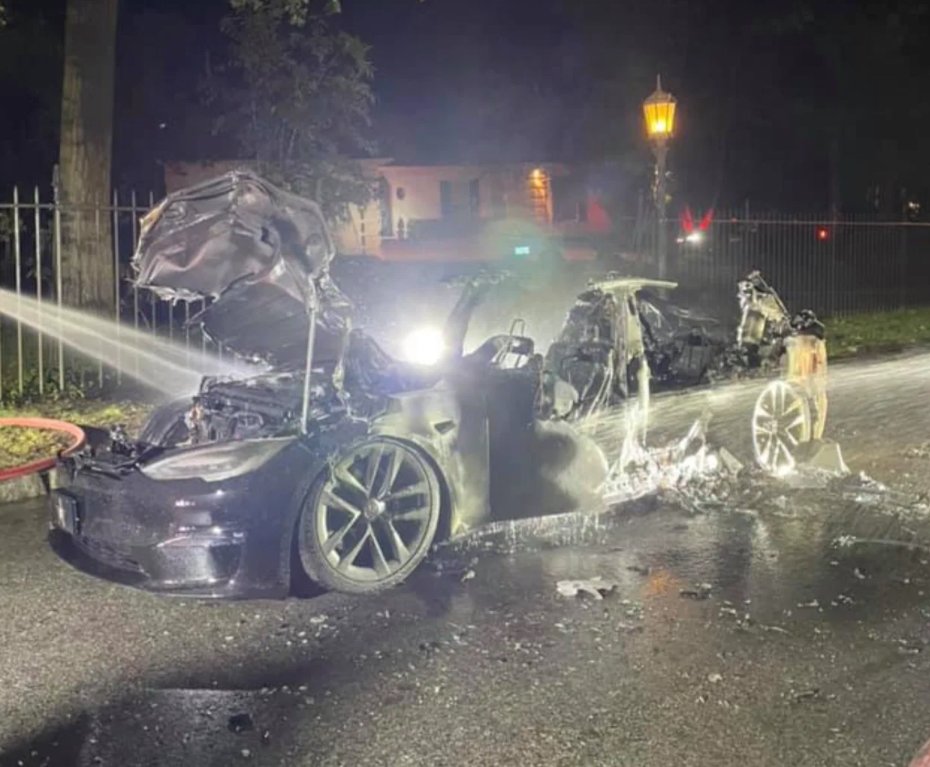 The news gained attention as the Tesla Model S Plaid started deliveries started only in June. There are very few Plaid variants on roads currently. Having won the Pike Peak International Club race, the Plaid variant is considered a tough car.

Additionally, the owner’s lawyer, Geragos, says that the owner tried to come out of the car. But the door wouldn’t open, so he had to force himself out of the car. However, the original news shared by EMT mentions that the owner was nowhere to be found. Tesla’s driving assistance doesn’t allow the car to go on its own without a driver. It is improbable that the driver wasn’t on board initially when the car started. As mentioned in Teslarati, the Model S Plaid is equipped with manual door release in an emergency. If the emergency manual door release was working properly, it could be possible that Tesla’s FSD could be at fault.

Either way, the details are fuzzy, and the resulted car is a wreck; not much could be established from a fully burnt car. However, the firefighters from Lower Merion Township Fire Department took the car and stored it safely overnight. Below is the picture shared by a lawyer from Geragos.

Our firm & @AthleteDefender represent an exec who purchased new Tesla Plaid Model S, which was 1/250 shipped. On Tuesday it spontaneously combusted. Our client was trapped & could have died. We tried reaching out to Tesla & have been ignored so far. This is car after escape. pic.twitter.com/wXyJXbWggJ

Getting into the details

Initially, when it was known that the driver was nowhere to be seen in the incident, the anti-self-driving group shared their opinions. The news kept unraveling in different places. It started from a post on Reddit; an EMT person shared the below post.

Later CNBC reported that more information should be out soon. The NHTSA said, If data or investigations show a defect or an inherent risk to safety exists, NHTSA will take action as appropriate to protect the public,”

This is not the first time firefighters took a lot of time to cool a Tesla vehicle fire. This time it took 90 minutes to cool down. At the same time, the issue of educating firefighters working on electric vehicle fires is secondary. Claiming that the car drove itself uphill while caught on fire is a questionable situation. However, more details are yet to unravel. The Plaid variant is a premium car from Tesla.