Tesla Sales Plunge, Will Things Change As China Media Apologized? After a customer protested about "brake failure", the sales have plunged 2/3rd times.

Only 11, 949 Tesla cars were registered in April, compared to 34,714 Tesla cars in March. Such a drastic plunge in sales is possible because of the protest which caused many media outlets to spread unfound truths.

Furthermore, the rumors spread on Tesla in China included the ones where people thought Tesla wouldn’t stay in the country once they pay their loan. While there is no evidence of any such planning by Tesla, Media Outlets recently apologized publicly.

Despite all the bad public opinion in the country. Tesla-based representative in Shanghai says that the lower sales are because of the two-week adjustment to an assembly line. 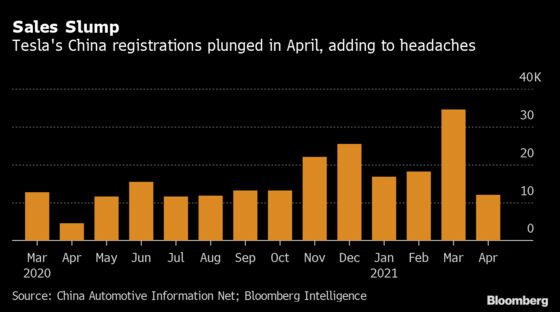 The shanghai protest caught the attention of the world. And the company recognized the importance of bringing out facts. The Special handling team was appreciated as the Media Outlets apologized to Tesla publicly.

However, the damage was there in the previous month. Tesla shares dropped down to $557.92, which is as low as 5.2%. Overall, there was a 21% decrease this year.

Tesla’s Giga Berlin is yet to start production, and the cars for European countries are being sent from the Shanghai factory. Which possibly saved the company from a lower sales plunge. As mentioned by the company, 14,174 Tesla cars were exported.

The cars exported were more than the cars sold locally. Which isn’t a positive sign considering that Tesla had the highest sales in China. In Q1 the Tesla Model Y was able to be the best model sold and had two cars in the top-selling EVs in China.

As the data shows, the trend may not continue with Q2 as the company is yet to work its way up in changing public opinion.

In October, when the announcement of the European market receiving China’s production cars pointed out how important China’s market is. China’s EV competitors are tough ones for Tesla.

Besides, the Tesla team in Shanghai has been working tremendously, bringing results. However, the Q2 sales don’t seem to be at the top without an increase in European sales.  But, the Giga Berlin is on its way to start production. Once the factory opens, the exports from the Shanghai factory will go down, leading to a decrease in Giga Shanghai sales.

As the protest in China caught a lot of attention worldwide, till the questions go down, the plunge in sales is expected to be the same or go down. Additionally, it is more unlikely that a new car model is to come along in the coming two months.