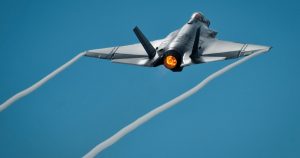 Artificial Intelligence has been successful in adding convenience and efficiency to a multitude of fields. Recently, the use of artificial intelligence in defense has gained a lot of attention. The discussion entails a chain of agreements and disagreements concerning the competence of a machine on the battlefield that requires prompt and proper decisions based on reasoning, logic, and to an extend human emotions.

Lately, AI has been gaining attention due to the training methods it offers to fighter pilots, to train in a way that braces them better to face a potential enemy. It has also thrown light on the capability of artificial intelligence to give a speed boost of efficiency to defense.

When it comes to training, pilots have to be sharp and precise and be braced to face the enemy and the different moves they might make. These days, training has attained another level of efficiency thanks to advancing technologies. With their help, training has become easier and more realistic.

Pilots will now be able to test their abilities and response to a potential enemy while in flight in the sky. This is made possible by AI-enabled machines which let the pilots engage in a dogfight against them while in flight.

A unique experiment was carried out by the Airforce where a manned fighter jet was pitted against a simulated Chinese J-20. An augmented reality “virtual” pilot enabled by AI which was visible through the helmet screen was used for the simulation. The AI-driven simulation was initially limited to ground-based systems. However, now it has been introduced to the cockpit of a plane in flight. This presents the pilot with an opportunity to fight with a simulated opponent flying a J-20 fighter, while in flight, adding to the real-time effect and efficiency of the training.

The dogfight involved a Freeflight Composite Berkut 560 Experimental Plane, pitted against a simulated adversary aircraft. The adversary was a computer-generated projection inside the AR helmet-mounted display of the Berkut pilot.

A Red 6-engineered AR system was used for the experiment, which was one of its kind. The AR system presented a wide field of view, virtual reality display in full-color, in addition, to control systems that facilitated image-projection directly into the cockpit.

The technology will facilitate pilots with real-world training experience, which will equip them with a better perception of synthetic threats, particularly in high-speed environments. This would require seamless blending of augmented reality with both the inside and outside environments of the cockpit.

The Potential of AI

The innovative experiment does not provide a clear report as to the success of the simulated adversary against the manned aircraft or vice-versa. This once again puts forth the question of competence of artificial intelligence in comparison to humans on the battlefield and whether they will be able to take quick and timely decisions in response to the rapidly changing battle environment. There are a lot of implications and questions when it comes to using AI in defense and it requires serious and detailed answering since one wrong move or error from the part of the machine can prove to be life-threatening.

However, taking the efficiency and abilities of artificial intelligence into consideration, it is safe to say that a combination of humans and machines will prove to be the most beneficial when it comes to defense.