The crypto-fuelled plan to buy the U.S. Constitution ends with money and no constitution

The ConstitutionDAO, which inspired blockchain idealists by accumulating nearly $49 million in the Ether in only a few days, did not win a copy of the US Constitution at Sotheby’s. The document, one of just 13 surviving first edition copies, sold for $43.2 million last night (to hedge fund billionaire Ken Griffin, CEO of Citadel, retail investors’ adversary). 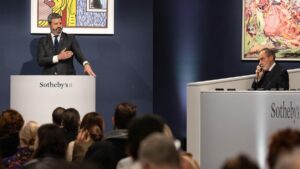 Due to Sotheby’s $6 to $7 million charge attached to the purchase price, Endaoment, a Bitcoin contribution platform that placed the bids on ConstitutionDAO’s behalf, told Gizmodo that they were unable to bid higher. Following the acquisition, they would have kept temporary ownership before transferring it to a 501(c)(3) formed up by ConstitutionDAO.

ConstitutionDAO stated on Twitter that it has set a new record for the most money crowdfunded in 72 hours, with 17,437 donors contributing an average of $206. It was also the first time Sotheby’s collaborated with a DAO, according to the statement. (A spokesperson for Sotheby’s declined to comment.)

“We’ve educated a whole cohort of people around the world about the possibilities of web3,” they stated, “from museum curators and art directors to our grandmothers asking us what eth is when they read about us in the press.”

Those who are unfamiliar with DAOs (decentralized autonomous organizations), they are public investment funds. Ones buy tokens in return for voting power, and then vote on what they should buy (say, stonks or the Wu-Tang record) and when they should cash out; the people who buy the most tokens have the greatest say in the process.

If ConstitutionDAO had placed a winning bid, contributors would not have received a portion of the Constitution; instead, they would have earned “governance tokens,” which would have allowed them to jointly determine what to do with the document and define the DAO’s mission.

Those who donated money are purportedly entitled to a refund, excluding a mandatory gas cost (which ConstitutionDAO claims will be sorted out once the co-founders get some sleep). Those who choose to leave their money in the reserve will receive governance tokens, which will allow them to vote on what happens next with it.

There were a few specifics to work out (such as which institution would be ready to fulfill the DAO’s governance’s wishes in perpetuity), but it was only three days ago that it went viral. If the projected mission proceeded as planned, that’s fantastic! Rich individuals storing art over a couch, waiting to flip it, is a lot more democratic approach.

The photoshopped references to Nic Cage in National Treasure, the on-the-nose purchase assured for virality—the ownership model for the copy of the Constitution smelled odd. Then there are the ConstitutionDAO’s convoluted explanations regarding who owns it.

“The community will be able to restructure ownership to best reflect the mission and ideals of the DAO,” one core contributor told Gizmodo after the purchase but did not indicate what prospective ownership models were on the table.

They’ve just mentioned publicly that they’d like to work with an institution to display it and pay for its upkeep. ConstitutionDAO’s 501(c)(3) would presumably fulfill DAO donors’ intentions, but the initiative is based on trust, therefore you’ll have to believe the co-signer’s Twitter biographies.

As blockchain-utopianism skeptic David Gerard pointed out when this took off, what would happen to the money was also a significant red flag. ConstitutionDAO guarantees that Juicebox, another DAO that is processing the payments, will return ether minus the required gas fees. Juicebox’s inventor “Jango” is also one of ConstitutionDAO’s co-signers, and Juicebox typically takes 5 percent of the money that flows through it, therefore Juicebox would have taken a $978,000 cut.

On Twitter, a ConstitutionDAO developer stated that Juicebox had waived the cost in this situation. If Juicebox hadn’t done so, it would have benefited even more by providing ConstitutionDAO Juicebox tokens (JBX) in exchange for the fee; such tokens are worthless unless more individuals own JBX.

The ConstitutionDAO claims that we should trust it because the co-signers have revealed their identities, however, Jango is only a Twitter handle. They have a $49 million task ahead of them to keep their commitments, which I hope they accomplish.