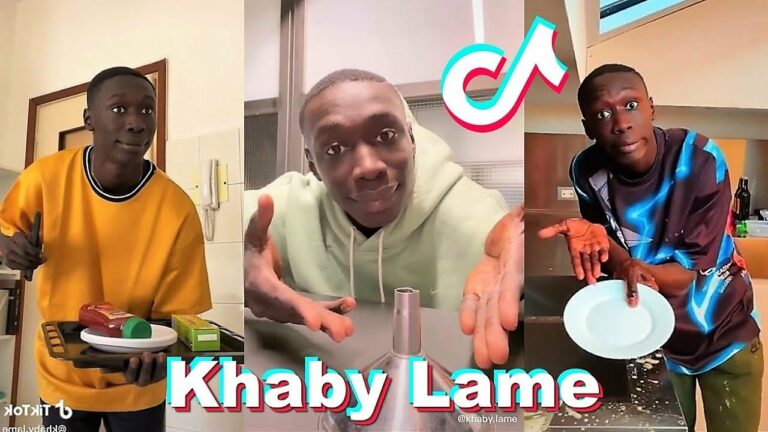 According to recent reports, Khabane “Khaby” Lame has managed to become the most followed individual on the popular short videos app, TikTok with about 142.8 million at the time of writing. Not just that, it is worth noting that, the 22-year-old silent comedian surpassed the popularly Charli D’Amelio who held the said record since March 2020.

To have a better understanding of the same, let’s start from the very beginning, shall we? In March 2020, during the early days of the Covid-19 pandemic, Khabane lame, a young factory worker from Chivasso, an industrial town in northern Italy, lost his job.

After losing his job, Lame went back to his family’s modest apartment, and despite his father urging him to apply for other jobs, he actually began to spend hours and hours each day posting videos on a popular video streaming app, TikTok under the name of Khaby Lame.

Now with the help of social media apps as well as several stitch features, Khaby capitalized on the momentum of viral and often absurdly complicated life hack videos by simply responding to them with wordless easy to understanding reaction clips and gestures in which he could do the same task in a much more straightforward way, thus making the entire thing even funnier.

The thing that is most relevant to his videos and making them so popular is to him always punctuating his gags with the video equivalent of a ‘duh’ punchline, offering an expensive roll of the eye, or shaking his head as well as extending his arms as if to say voila!

If some of you have been following Lame since his initial days of TikTok-Ing, you would probably be aware that, Lame used to post in Italian back then, with subtitles, and sometimes, he even spoke in his native, northern accented tongue

However, it was always the wordless, expensive reaction clips that managed to have catapulted Mr. Lame to international stardom. In addition to this, it was said sometime back in an article that, with 65.6 million followers on TikTok back then, it was anticipated that if he continues to acquire followers at his current arete, he will soon become the most followed creator on the said platform, beating 17-year-old Charli D’Amelio who had 116 million followers.

As it turns out the prediction was right as it did really happen and Khaby Lame managed to become the most followed person on the platform surpassing the said creator. Not just that, Khaby’s fans have also flocked to Charli D’Amelio’s TikTok handle in order to inform her of the leader change.

Now, over the past two years, Khaby has amassed nearly three million followers a month, while Charli gained around a million. Also, in a recent interview, Khaby Lame told Forbes that, “The pandemic had just started, and I was bored with a lot of time on my hands so I started making videos on TikTok,” and about his rapid rise to fame, he mentioned, “I speak a universal language that everyone understands.”

“I would describe myself as a simple person, but full of ideas and inspiration,” he added. “Making people laugh has always been my biggest passion in life.” Furthermore, it is worth noting that, along with claiming the so-called crown of the most followed person on the platform, the 22-year-old also holds the title of the most viewed video on the platform.

However, in these short two years of Lame’s journey on TikTok, it’s estimated that he has been able to accumulate a total net worth of about 6 million dollars alone in 2021. On a similar note, the influencer marketing hub reports that Khaby could be earning somewhere between 98,561 US dollars and 147,842 dollars per TikTok post.

I don’t think this is bad for someone who has only been active on the said platform for just over a year or so! Now, speaking of D’Amelio, she has been the reining queen on TikTok for quite some time and has a vast number of followers herself, and has been increasing quite rapidly over the years with her viral dance routines which mirrored the growth of the site as well.

As mentioned earlier, for quite some time, her popularity was unmatched and when she managed to become the first-ever person to hit 100 million followers back in 2020, she responded by sharing a video with the caption, “A HUGE THANK YOU TO EVERYONE WHO HAS HELPED ME REACH 100 MILLION SUPPORTERS!!! AND ANOTHER HUGE THANK YOU TO @tiktok I LOVE EVERY ONE OF YOU!!!”

In the video as well, D’Amelio said that the achievement was like a dream to her and added that, “I can’t believe there are 100 million supporters following me right now. That is insane, oh my goodness.

However, despite everything, Khaby rack up a staggering 140.8 million followers with a mastery of funny facial expressions as well as physical comedy reminiscent of the popular TV show, Mr. Bean, that I think we have laughed watching back when we were a kid.

Having said that, in an official statement released last year, Lame had expressed he was extremely passionate about entertaining people as well as making them laugh. The statement made was, “I am passionate about entertaining and making people laugh since childhood, and I am thankful to TikTok for offering me a global stage to share my passion with the rest of the world. I will continue to work towards my dreams, knowing I can count on a beautiful community ready to cheer me on. Thank you and I love you all!”

In addition to this, know that the famous TikTok creator was inspired by several global celebrities like Eddie Murphy, and Will Smith as well as several cartoons too. Just to know how the man thinks about himself and his success, on being asked what was his most favourite video out of the several that he has posted, Lame replied that all of his videos have made him proud and don’t have one in particular.

Also, Lame’s first-ever viral video was posted back in November 2020, which was reportedly viewed over 17 million times, reported variety. In the short clip, he was seen reacting to life hacks where a man locks a woman’s backpack to a post.

Through his signature gestures and expressions, Lame showed how the woman could easily extricate herself by simply just taking off the backpack. Moreover, I believe most of you know Khaby through Instagram or Facebook reels too just like me as he also uploads these videos on these platforms apart from TikTok of course.

Now, what we all need to know about Khaby’s success is that his meteoric rise as a digital creator is noteworthy because his work can be seen as lacking in polished production value associated with the famous TikTok starts off today, and the fact that, Lame didn’t get success by joining a collab house with other 20 somethings or by simply relying on artificial growth like buying followers online or even views for that matter. Rather, all of his growth and success are one hundred percent organic.

What I believe is that Khaby’s content nearly rocks or debunks the overproduced trends that we see happening across social media, whether it’s life hacks or another thing like that. This is a common perception amongst people that if someone is trying too hard with all these filters and editing, it does not feel that authentic and appealing at times, which is surely not the case with him.

Also, know that Mr. Lame’s followers or rather admirers are said to operate pages in German, English, Spanish, Portuguese, Arabic along with many more. Well-known YouTubers including King Bach have also been known to have contacted Khaby for collaborations. Moreover, he is also said to be working with a few brands to earn that extra buck.

Since we are keeping a note of how famous he is, I surely should have started with the fact that several celebrities, as well as other influential people, are certainly taking notice of his rise. This is happening to an extent that, even Mark Zuckerberg the CEO of Facebook has recently commented thumbs-up emoji on Mr. Lame’s recent Instagram post, which I think you already know is a big thing for someone who is just 22 or for someone who has just started off a year back on social media.

Reading so far, I hope you have gotten a fair insight into the life of Khaby Lame and his surging popularity and by now I believe you would agree with me on the fact that, Khaby is an inspiration to a lot of people out there, especially of his age group and I myself am very keen on seeing what the future holds for the boy!

In conclusion, what are your thoughts on Khaby Lame becoming the most followed person on TikTok? Do let us know in the comments area below. To know more about such reports, do check out other articles we have on our website. Thank you for your time & if you found our content informative, do share it with your investor friends!