The ‘Wild West’ of cryptocurrency requires better investor protection, according to the SEC’s chairman

Chairman Gary Gensler of the Securities and Exchange Commission said Tuesday that the agency will monitor cryptocurrency markets as much as possible, renewing the agency’s appeal for Congress to grant it additional authority and resources to oversee the sector. 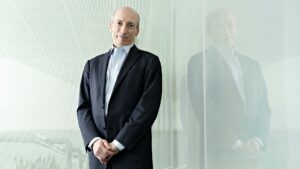 Treasury Secretary Janet Yellen said in May at The Wall Street Journal’s CEO Council Summit that she did not believe there was a suitable regulatory framework for cryptocurrencies, but that the Federal Reserve is cautiously exploring one.
Financial regulators in the United States have struggled to keep up with the rapidly evolving world of bitcoin and associated financial technology. Unlike the securities and derivatives markets, crypto exchanges and brokers are not regulated. Scams have increased in tandem with the asset class’s market worth.

Mr. Gensler, a Democratic regulator who taught a cryptocurrency course at the Massachusetts Institute of Technology, identified a number of areas where the SEC’s jurisdiction should be expanded. Large swaths of the cryptography field, he claims, are straddling the line.

Decentralized financial applications, or Defi, let users borrow, lend, earn interest, and exchange assets and derivatives. People who want to borrow against their cryptocurrency holdings in order to place larger wagers frequently use the services.

Mr. Gensler said he believes that these platforms just won’t imply the securities laws and some platforms may also imply the commodity laws and the banking laws.”

Digital assets pegged to the value of national currencies may fall within the definition of securities or investment businesses, making them subject to SEC regulation.

Stablecoins are commonly used by traders to exchange one crypto asset for another, according to Mr. Gensler, who claims that roughly three-quarters of cryptocurrency trading in July was between a stablecoin and another token.

Stablecoins are digital currencies that are connected to an underlying asset such as a national currency or a precious metal like gold. Fiat-backed, cryptocurrency-backed, and commodity-backed stablecoins are the three primary types of stablecoins.