Hamster who outperformed Warren Buffett has passed away

Mr. Goxx, the hamster that made a name for himself by trading cryptocurrency, has passed away. Since he began trading in June, Mr. Goxx has had a great performance that has outperformed the S&amp; P 500. Mr. Goxx’s most recent deal was the sale of over 3,000 Tron tokens on November 20. 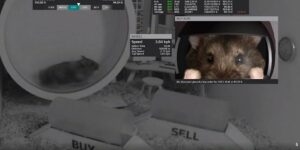 Mr. Goxx, the Hamster who outperformed Warren Buffett has passed away

Goxx’s portfolio was reportedly backed with the euro equivalent of $390, according to Protos. The hamster’s trades are set to 20 euro increments by default, according to Mr. Goxx’s unknown carer and business partner.

“Mr. Goxx has brought joy to people all across the globe and reminded us not to take life too seriously,” Mr. Goxx’s anonymous caretaker said in a tweet on Wednesday. Mr. Goxx showed no signs of serious illness and fell asleep peacefully on Monday said the caretaker.

We feared this day like no other and are truly shocked for it to happen just now.

In deep sorrow, we have to announce the loss of our beloved furry friend.

Over the summer, Mr. Goxx captivated the internet by placing trade after trade for various cryptocurrencies in his hamster trading office, which included a wheel of intention, buy and sell decision tubes, and a variety of sensors and cameras.

Mr. Goxx has performed nearly twice as well as the S&P 500 since it started trading on June 12. Last week, the hamster sold 3,229.4 TRX tokens, which proved timely since the cryptocurrency plummeted nearly 10 percent after eToro said it would delist TRX from its platform for US investors. According to Mr. Goxx’s last Livestream video, his top three holdings were stellar, ether, and chiliz.

Mr. Goxx’s success enabled his caretaker to generate almost $12,000 through the sale of Goxx Capital-themed NFTs. According to an October interview with Insider, the money was used to expand the hamster’s trading portfolio and build a bigger and better trading setup.

For the time being, the concept of continuing the crypto trading enterprise with a new pet is irrelevant to the caretaker, who is mourning Mr. Goxx’s death.

“Max, thank you, and may you rest in peace (a.k.a. Mr. Goxx). You will be missed, and your legacy will live on on the blockchain for all time “Says the caretaker,” he says.