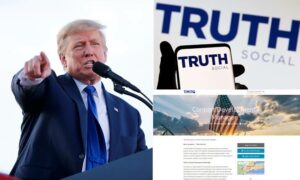 Reports suggest that Donald Trump’s media company, TMTG is in the process of recruitments for its new streaming service. They are hoping that this upcoming venture would emerge as the right wing’s answer to existing streaming platforms such as Netflix, Hulu and Disney+.

On Wednesday, May 11, the Trump Media and Technology Group posted an ad which included this announcement. This described the details about how it would a ‘Big Tent’ platform which would offer ‘broad based entertainment’ with its roots in free speech.

The advertisement said how the firm was in the process of hiring. Specifically, they were  looking to hire a content manager who would create programming for the TMTG+. It went on to specify how this would be an addition to the company’s SVOD (Subscription Video on Demand) and  Truth Social. TMTG+ would be home to a wide range of content that would be ‘original, scripted or non-scripted.’

Moreover, the advertisement also specified the role of the content development manager. They would be responsible for generating and developing ‘internal concepts for original unscripted content, short form series episodes and specials.’ Along with it, staying aware of ongoing ‘developing trends at networks,’ and staying up to date about ‘emerging talent and upcoming non-scripted programming.’ Additionally, the company posted for another requirement on an another ad. This was for a content acquisition professional who would be responsible for overseeing ‘content licensing and acquisition.’

“This is an exciting opportunity for someone to put their stamp on a new and exciting SVOD platform,” the ad said.

According to them, the ideal candidate for the position would require certain abilities. Mainly, identifying content for licensing, source ownership, along with negotiating ‘distribution rights for our SVOD platform.’

Former President Donald Trump had first announced the launch of TMTG in October 2021. His spokesperson, Liz Harrington had  mentioned earlier how the company could be possibly valued at $1.7 billion. Mainly, this would possible if a pending regulator approval goes through regarding a merger with shell company, Digital World Acquisition Corp.

Both, Truth Social and the TMTG+ Streaming channel is owned by TMTG. Trump had essential come up with Truth Social, as a competition to social media platform Twitter. This was after he was banned from it following January 6, 2021 insurrection on Capitol Hill.

Trump’s Truth Social was launched in February, 2022. He had described it as a means to retaliate ‘against Big Tech.’ However, it has since struggled to achieve momentum following a series of unfortunate misfires at its early stage.