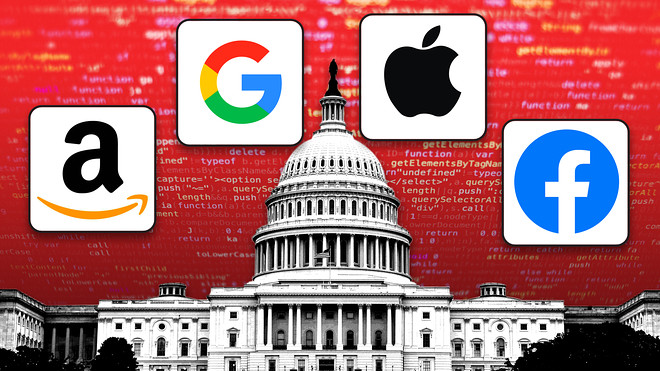 The ‘Big-Tech’ is referred to the existing monopoly of the biggest multinational global technology powerhouses- Facebook, Amazon, Google and Apple. These companies have individually become too big to care and this is what worries the United States of America. Following the trends of the recent past and all the assumptions and predictions about the future of the technology industry and the role of the Big Tech in the advancement of technology, the government intends to control the power with which these Big Tech operate.

According to recent reports, the lawmakers of the United States House of Representatives have introduced four bills on 11th June i.e., Friday that are aimed at breaking up the monopoly of these Big-Tech companies that include Facebook Inc., Amazon, Apple Inc. and Alphabet’s Google.

As mentioned in a report by Reuters, the House of Representatives have come up with four new bills out of which two bills address the issue of these giant technology companies such as Google and Amazon, who create separate platforms for other businesses and then promote competition against those businesses. These anti-competitive practices are looked upon as a major threat in the eyes of the United States government.

This bill can create a big problem for these technology companies, so much so, that they might have to sell their assets to not be counted as defaulters after the enforcement of these laws. The House of Parliament’s intention of breaking up the Big Tech monopoly has taken one measure to ban these companies from owning subsidiaries that can operate on their own platforms if those subsidiaries compete with other businesses in the market. According to the U.S. government, this practice jeopardises the competition within the market.

The second biggest measure that these recent bills talk about is to make the practice of giving preference to own products on their platforms, illegal. The U.S. House of Parliament plans on levying a hefty 30% fine of the U.S. revenue of the affected business if they violate this rule. For instance, Apple and Google will not be able to promote their own app on their own respective app stores.

Anyhow, people have their own opinions on the matter, Robert Weissman, President of the advocacy group at Public Citizen says that the Big Tech’s unchecked and unregulated growth and dominance have led to incredible abuse of power that has hurt small businesses, consumers and innovation at large.

While on the other hand, the U.S. Chamber of Commerce says that it strongly opposes the introduction of these four bills because of their approach. The chamber says that bills that target specific companies instead of focusing on business practices are simply a bad idea and a bad policy. These four new policies can be ruled out as unconstitutional, says Neil Bradley from the Chamber of Commerce.