The Electric Vehicle (EV) market is still growing in India. Many companies are now trying to enter the market and provide services mainly in the four wheeler sections. However, the adoption towards these Electric Vehicle (EV) purchase and usage is a bit slow. One major reason for this can be the high amount of costs involved.

There have been constant efforts in order to reduce costs wherever possible. An Indian startup from Hyderabad called the Uton Energia has also been working in the same direction. They have been able to develop and introduce an electric two wheeler vehicle called ‘fortyfive’. This vehicle is light weight in nature and has a low cost and is capable of providing a short distance travel.

He further adds, “This is primarily because the average speed of Indian commuters is just 17 kmph. In urban dwellings, a commuter spends almost 7 to 10 per cent of their day on the road. Coupled with the rising price of fuel, it is safe to say that most people are figuratively, and literally, burning their money while they are stuck in traffic.”

This electric vehicle was introduced in February 2021. It is cable to be used only for short distance travel. The users while using this bike must have a licence or a registration in order to drive this e bike in the city. 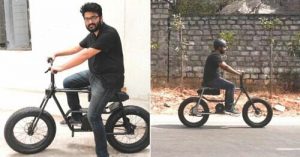 While explaining the functioning of fortyfive Sri Harsha Vardhan Kanumalla says, “Our emphasis is also on how the battery and motors are behaving. For example, every component in the battery and motor are monitored through our app and potential issues with them are raised to the user on the app. Our app monitors 23 different parameters of the vehicle, particularly the battery.”

He further adds, The app allows you to monitor the status of your vehicle — whether it is the real-time status of the motor, the health of the battery or its degradation, the distance traveled and the remaining distance you can travel without recharging. The issues raised can be largely solved remotely unless the vehicle has experienced extensive physical damage. For example, if there is 15% battery charge left, the feedback helps users adapt to the required speed that helps them cover the necessary distance.”

This e bikes is equipped with a removable battery. This removable battery can be fully charged in less than 75 minutes, which means it can be charged at home or at office. The cost of charging is battery is roughly equivalent to one unit of electricity which roughly comes to Rs 6. Once the battery is fully charge this bike can provide the range of around 65 km.