WeWork Appoint CEO Mathrani as Chairman Mr. Mathrani has a lot of experience in the real estate field

Wework Inc, an office space renting company recently announced that they will be appointing Mr. Sandeep Mathrani as their new chairman as the company heads into the upcoming fiscal year.

Mathrani is a man with experience; who was the CEO of GGP group, steering them out of bankruptcy, 11 years ago. He was then the CEO of Brookfield property, a real estate firm. Staying in the world of real estate, Mr. Mathrani is now the CEO of Wework, a company has been drown trotted recently especially during COVID. 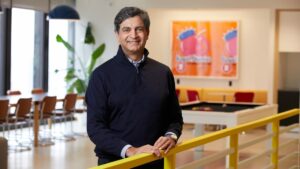 Mr. Mathrani joined the firm two years prior, and as now taken up the role as CEO, from Adam Neuman who completely buckled under the pressure while trying to launch their first ever IPO.  After that disaster, the company finally went public but its stocks have fallen a huge 40%. But they have shown some promise recently, with some light upturns of fortune.

The prior CEO does have a clause where he can request to join the company again as an observer to their board, but Wework has not received any yet according to sources close to Mr. Adam Neuman.

WeWork also announced earlier this week that Mr. Saurabh Jalan from SoftBank Group International, has been appointed as part of their board.

This now marks three people of Indian origin who have joined the company in quick succession. Prior to this, Mrs. Kirthiga Reddy was appointed as part of the board. Her tenure of working for Athena SPAC as their president proved to be very fruitful. The company has also added five other experienced people to their board.

Wework is a company that requires companies to rent their physical spaces so they can build an office and commence with operations. But, ever since that start of the coronavirus epidemic, the world moved online and companies phased into the digital world.

People chose and were then ruled to work from home by the government, making the entire concept and business model of Wework completely redundant and outdated. The value and share price of the company plummeted.

Their revenue reduced by $120 million USD in 2020 compared to their previous year which reduced their valuation from $47 billion USD to just $10 billion USD. The company had a slight recovery in revenue in 2021, but they still ran massive losses.

As the world is now gearing up for a life back to normal, Companies are going to be looking for offices space to rent. Wework estimates that their revenue will increase by 30% this year.