What is Dogecoin? Should you buy it now?

We all know what memes are; they make us laugh. But this meme that started in 2013 had not only made people laugh and but also made them a lot of money. Heck, a person even became a millionaire by investing the stimulus checks he received during the pandemic. But what is this Dogecoin that is making so much money for others? Let’s take a look at the fundamentals of the currency and answer the big question, should you invest now? or is it too late? Do note that this is not financial advice but just my understanding of the market.

Dogecoin was created by Billy Markus and Jackson Palmer back in 2013 as a big joke. Its primary motive was to mock the idea of cryptocurrencies as it was based on a meme of the dog Shiba Inu. I am pretty sure you have seen it somewhere on the internet. Since the coin was created as a meme, it garnered a lot more attention as compared to other coins at the time. There were more than 10 lakh visitors on their site in just a month, and the coin was doing really well. But even though the number seems high, it is not. In fact, taking the perspective now, it just a fraction of what Dogecoin is now. 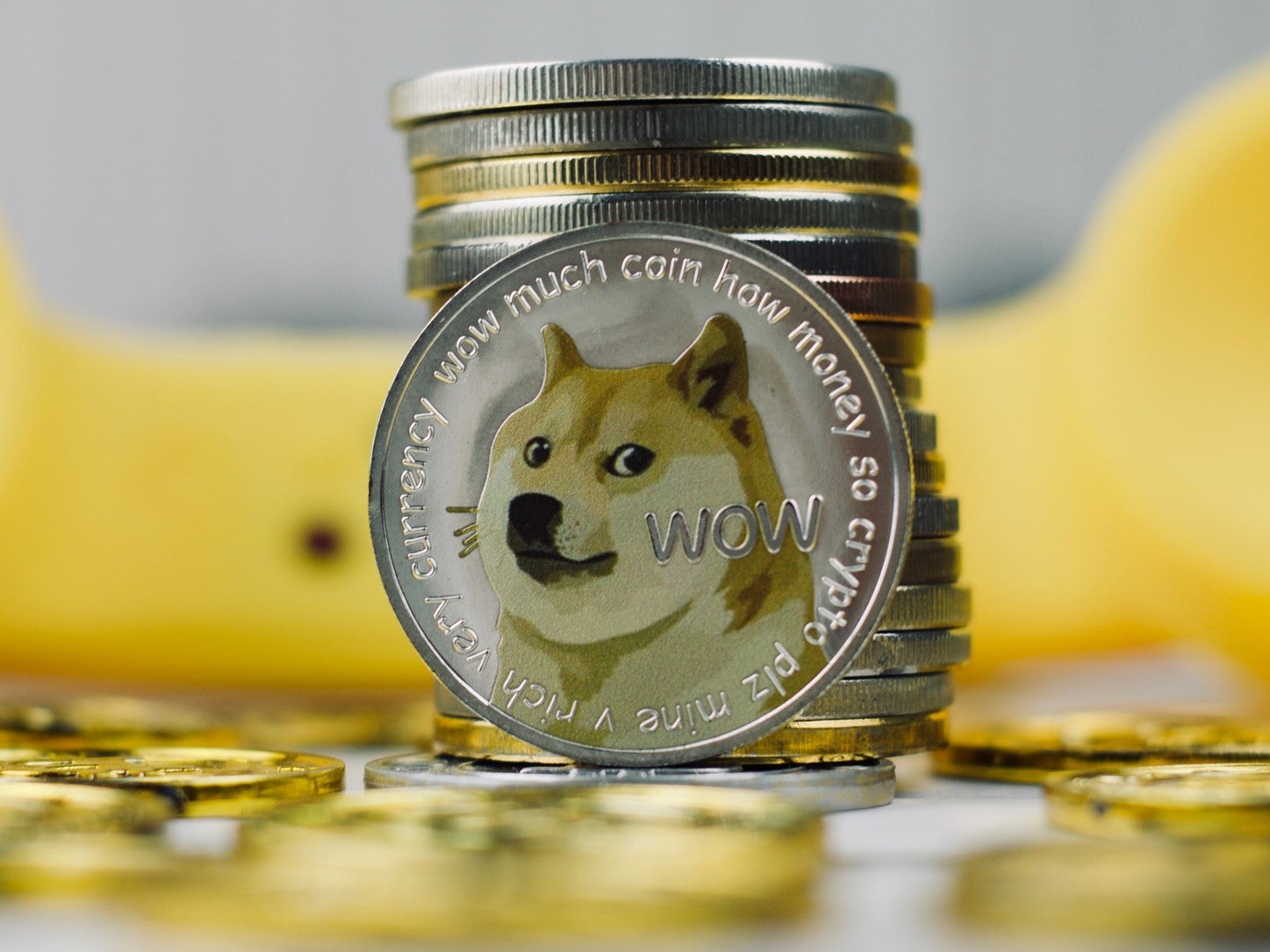 Even though Dogecoin was made after Bitcoin was released, the idea was never to beat it and become the largest coin on the internet. In fact, no other coin thinks this except Doge. It was also based on a proof-of-work algorithm and was based on the protocols of Litecoin and some other alts that existed at the time. But one thing that made Dogecoin completely different from others is the abundance of the coins. Unlike Bitcoin, which is limited in quantity and the max number is fixed at 21 million, Dogecoin has no such upper bound. And this is the primary reason why it was seen more as a joke. Unlike other coins, it is inflammatory as there is no supply constraint if demand goes up, which doesn’t push the price much (until now!).

The soaring popularity of Dogecoin!

One big advantage that Doge has over any other cryptocurrency is popularity. Even though there are big investors in Bitcoin, ETH, XRP, DOT, and others, Dogecoin’s fan following is much wider. The fact that it’s affordable and is based on a meme makes people happy investing in it. When people buy Dogecoin, they don’t invest in it for making money in general, it’s just for fun, and that’s what makes it special. At the beginning of 2020, Dogecoin was trading in under Rs 1, and now it’s at Rs 32. There has been a 77x price jump in 4 months, but how? I would say fan following.

Elon Musk, CEO of Tesla and SpaceX and also one of the most influential personalities on the planet, has time and again spoken in favor of Dogecoin. His tweets have sent the price of Dogecoin to new highs and made it really popular. But this latest price jump that happened is unlikely to be because of him. This is because the price of Doge didn’t increase after a tweet which happens generally. In fact, this time around, he tweeted, showing his delight after Dogecoin actually increased in price.

Everything to the moon!

Elon has also talked about Dogecoin becoming the currency of the planet. And even though that’s a stretch, I would love to transact in memes😂. The point is the sole carelessness of Dogecoin has pushed it high and makes the dream of achieving $1 a reality. The community or fanboys (if you say so) are so enthusiastic about Doge that their determination to HODL could propel its price.

Does Dogecoin have a future? 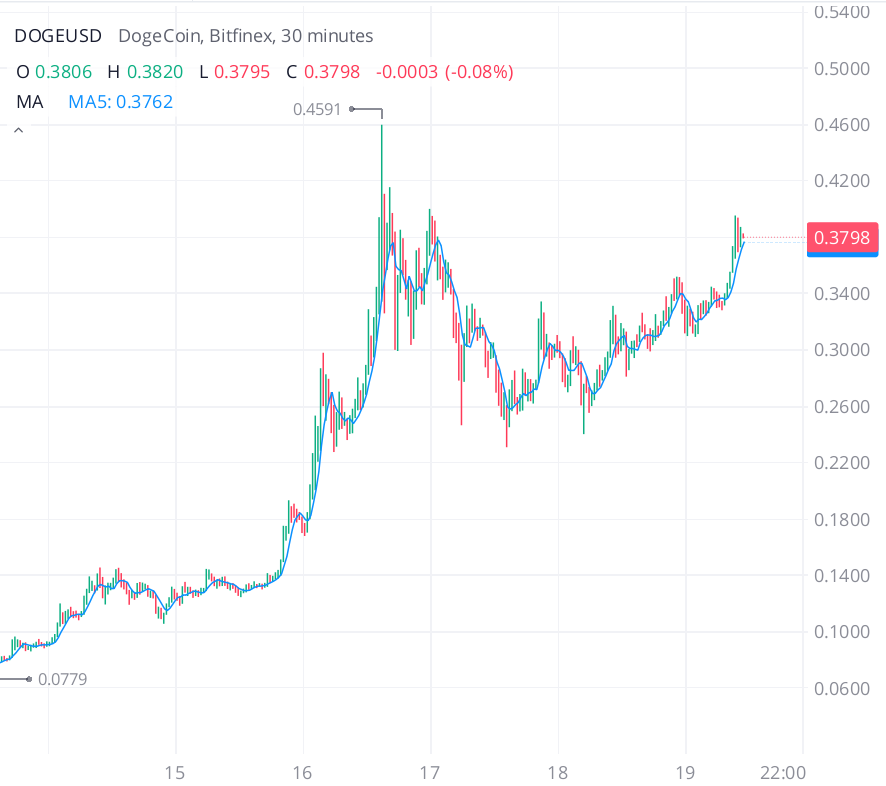 Yes, it definitely does. When it was trading at 5-6 cents, I would have probably shied away from the question. But since the price is already 1/3rd of a dollar, Dogecoin can become more popular in the future. It also has a lot of practical uses and benefits as compared to other coins in the market. For example, the transaction fees are really low at just $0.01, which makes using the coin a really good choice. It also takes much less computational power to mine as the problems are not that complex.

The community of Dogecoin has also been doing some pretty good stuff with the currency. They have raised funds to make wells in Kenya, sponsored a NASCAR driver to use a Doge-themed car, and also funded the Jamaican Bobsled team’s journey to the Olympics. With this kind of usage, it won’t be surprising to see that the currency gets accepted by major merchants to boost its usage.

Should you invest in Dogecoin?

This is something you need to decide on your own. For now, the future does seem bright and there is a chance for a huge breakout as Dogeday is approaching. We could see the price of the currency push to $1 and even further. Well, if you decide to invest in Dogecoin do ready yourself for the huge fluctuations that come with it. If you have seen the 200% gain in a day and plan to invest then also remember that it falls that way too. Also, remember since it is not very expensive, the coin is also susceptible to pump and dump schemes which can result in huge losses for a lot of investors. All in all the coin can be a good risk that one can take, but it will be unwise to allocate more than 10-15% of one’s portfolio in the same.

Are you an investor in Dogecoin and do you think that it has a future? Let us know in the comments below. Also, if you found our content informative do like it and share it with your friends.

Also Read: How to buy Dogecoin in India?