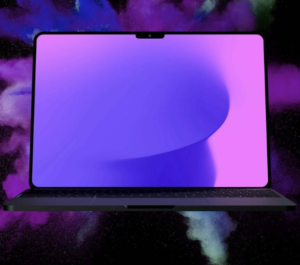 The new MacBook Pro 2021 14-inch and 16-inch MacBook Pro should be shown during the Apple event on October 18, with long-standing reports pointing to a flatter appearance, the demise of the TouchBar, and the reintroduction of MagSafe charging.

This, of course, comes with a slew of pleasant internal improvements that promise to make both the giant 16-inch model and the smaller 14-inch MacBook Pro the greatest computers money can buy. Assuming the price isn’t too exorbitant.

However, in the last 48 hours, a new rumour has gathered traction, and some are concerned that it could cost the 2018 MacBook Pros some significant aesthetic points: a camera notch. Could Apple actually bring such a controversial design element to its MacBook range while allegedly attempting to remove it from the iPhone 14?

Yes, it’s grainy, and it’s difficult to tell whether it’s genuine, but if it is, it displays the FaceTime camera, a microphone, and an ambient light sensor that enables TrueTone. MacRumors uncovered resolutions of 3,024 x 1,964 for the next 14-inch MacBook Pro and 3,456 x 2,234 for the 16-inch MacBook Pro in the macOS Monterey beta, indicating that the notch rumor is real.

If you remove 74 pixels from the height of each, you get the same 16:10 aspect ratio as the rest of Apple’s current MacBooks. That suggests the extra 74 pixels might be responsible for the new notch.

People complain about the iPhone notch because it plainly cuts into the screen, but that is unlikely to be the case with macOS. This is due to the operating system’s usage of a black bar at the top of the screen, which may easily conceal the camera section.

It may not even be seen when viewing movies or playing games: the next MacBooks’ reported mini-LED panels may just shade the entire region black, making it appear to be part of the bezel. The major cause for mistrust is time. This rumor has arisen at the last minute and has not been mentioned by any of the typical Apple leak suspects: not a word from Ming-Chi Kuo, Jon Prosser, or Mark Gurman.

That isn’t conclusive in and of itself, since even the most seasoned leakers miss things or get details incorrect (see the rumored square Apple Watch 7), but it is cause for concern. Since the iPhone X, all flagship Apple devices have included a notch to contain the sophisticated technology necessary for the company’s Face ID identification technology. Nobody, not even the proponents of the notch rumor, believes the next MacBook Pros will include Face ID.

The speculation is that Apple will upgrade the webcam on the MacBook Pro, which makes sense given that we’re all working from home more these days. Some of the best laptops on the market feature 1080p cameras, and they all manage to fit them in the (admittedly larger) bezels.  You can find out for yourself by tuning in to the Apple event on Monday at 1 p.m. ET/10 a.m. PT.