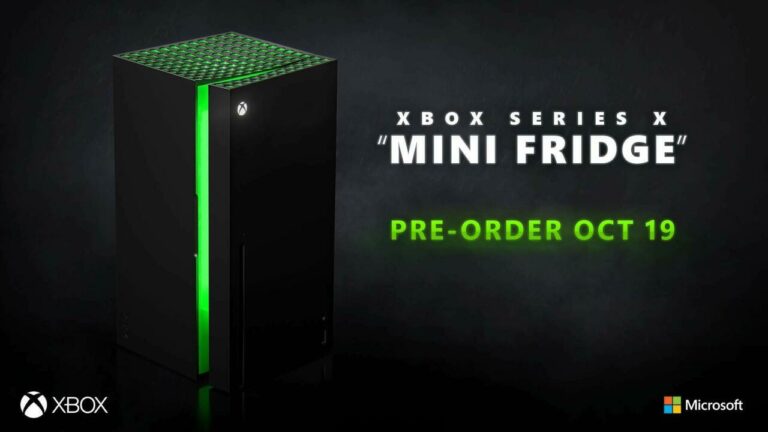 UPDATE: Xbox mini fridges will be available to purchase in Canada via the Xbox Gear Store. In it’s initial announcement Microsoft shared that Target.com would ship to Canada, but unfortunately that is no longer the case.

Microsoft will begin selling the Xbox Series X Mini Fridge in time for the holidays, as promised. The fridge will cost $100 and pre-orders will begin on October 19th, according to the business. It will be available in December.

The little fridge was inspired by an image shared by Xbox to demonstrate the size of the Xbox Series X in comparison to a full-sized refrigerator.

Last year, Microsoft built a six-foot refrigerator to promote the introduction of the console. Now, thanks to a victory in a Twitter battle of the brands, you’ll be able to buy a little replica of the fridge.

Microsoft collaborated with Ukonic, a merchandising company! on the Xbox Series X-themed mini fridge, which has LEDs and a design that matches the console.

There’s no debating that the Xbox Mini Fridge is a bit of a gimmick and not very useful. It all started with a meme that went viral, and now we’re months away from the retail release.

Up to 12 cans of your favorite energy drink or other beverage can be stored in the compact appliance.

There’s also some room for food on the door’s shelf. There’s a USB port and a DC power adaptor provided, which could be useful for charging your Xbox Wireless Controller.

Target will sell the tiny fridge in the United States. It costs £90 in the UK and can be purchased at Game. At first, the fridge will be shipped to France, Germany, Italy, Ireland, Spain, the Netherlands, and Poland.

In it’s initial announcement Microsoft shared that Target.com would ship to Canada, but unfortunately that is no longer the case.

The Xbox Mini Fridge will be available in more regions next year, however the exact locations and dates will be determined by governmental clearances and limits in each country.

But, hey, since the Xbox Series X is still exceedingly hard to come by, enthusiasts may at least get something that looks like it. Well, perhaps. The Xbox Mini Fridge is expected to sell out soon, especially because it’s only available at a few chosen retailers. There’s a good chance Xbox Mini Fridges will sell for close to the price of the console on eBay.

However, Xbox’s Aaron Greenberg pointed out on Twitter that the Xbox Mini Fridge is not a limited-edition product. Microsoft is producing “as many as we can this holiday season,” with a second batch arriving early next year. Fans should expect it to sell out, according to Greenberg.