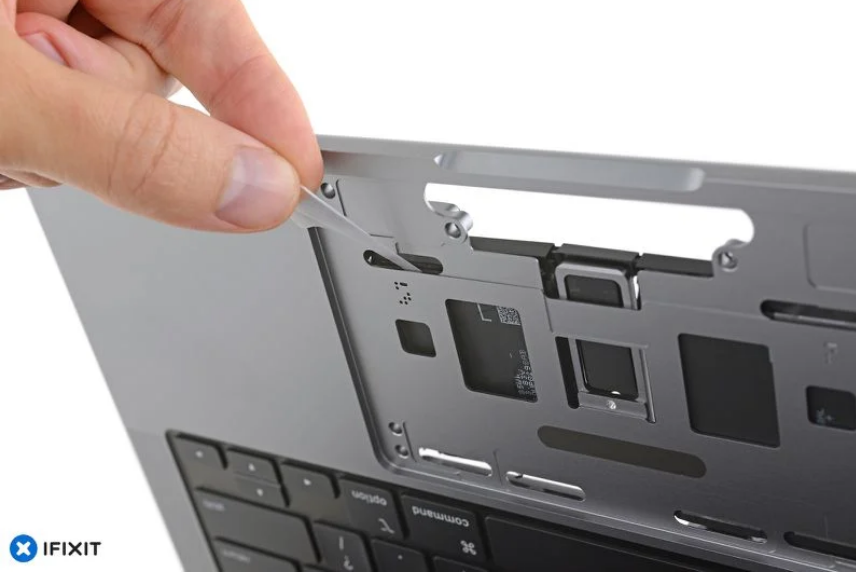 iFixit has released a preview of its 14-inch MacBook Pro disassembly, and one notable feature is the introduction of pull tabs for the battery cells, which the repair website claims would make do-it-yourself battery replacements easier.

According to iFixit, the four outside battery cells have plainly visible iPhone-like pull tabs, and after the trackpad is removed, there are holes in the chassis to reach the pull tabs that keep the center two battery cells in place. Because the forthcoming 16-inch MacBook Pro has a similar internal architecture to the 14-inch model, the pull tabs are expected to be there as well.

Since the first MacBook Pro with a Retina display was released in 2012, the battery cells have been fused into the “top casing,” which houses the keyboard and trackpad. When an Apple Store or an Apple Authorized Replacement Provider replaces the battery in certain earlier MacBook Pro models, the complete top casing must be replaced, even if the client just pays a battery service price of $129 to $199 out of warranty.

It’s unclear whether the pull tabs will affect the technique, but they will undoubtedly aid do-it-yourself repairs by making the battery cells more accessible.

After being announced last week, the new MacBook Pro models went on sale on Tuesday. iFixit says it will provide its complete deconstruction of the new MacBook Pro shortly, but in the meanwhile, several customers have already opened theirs, giving us the first glimpse inside. Battery pull tabs are also included on 2018 and subsequent MacBook Air models.

The new 14-inch and 16-inch MacBook Pro models have bezels that are 24% smaller (on the left and right) than prior generations. According to Apple, the top bezel measures only 3.5 mm and is 60% thinner than previous generations.

Aside from the notch, the new laptops have a redesigned chassis, more connections including HDMI and an SD card slot, MagSafe, a mini-LED display with ProMotion, and an M1 Max CPU. Apple’s M1 Max CPUs are in-house processors built for professional users.