A Ford Mustang Mach-E owner shared a video, where the vehicle seemed to be charging at a Tesla Supercharger located in Franklin, Massachusetts. While there is no news about Tesla opening the charging network to other vehicles. It was later confirmed that the adaptor being used in the video is not suitable for Superchargers. The Tesla Supercharger used in the video is a not so actively listed charger in the Tesla app. It could be possible that it works with destination chargers. 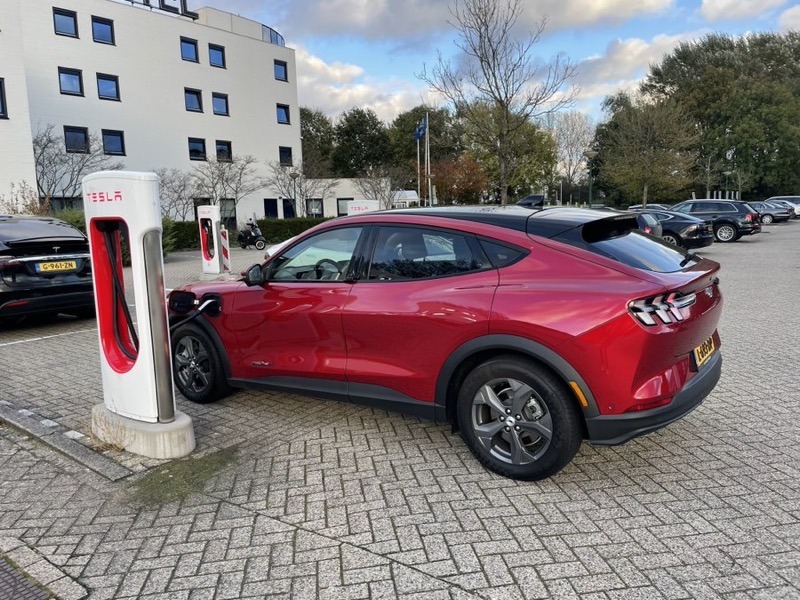 The video was first posted by Teslarati, showing the vehicle being charged. The supercharger is brand new and isn’t actively visible on the Tesla app. However, the charger seems to be able to charge and is also seen charging a Ford EV. In the past, Elon Musk tweeted about Tesla giving access to other EVs for its Superchargers. However, it is only known Tesla is working to expand its charging program in Norway. In the tweet, Musk did state that by the end of 2021 Tesla plans to release its charging network to other vehicles.

We created our own connector, as there was no standard back then & Tesla was only maker of long range electric cars.

That said, we’re making our Supercharger network open to other EVs later this year.

There are only a couple of days for this year to end. It is too early to tell if the other charging points are available for other vehicles. Tesla has a vast network on online platforms, there must have been some videos in case someone tried the new feature. The company has built 3,000 charging stations in the US and around 27,000 all over the world (by July 2021). Interestingly, there was also a time last year, when Musk stated that Tesla Superchargers could be used to charge other EVs, but it is only “low-key”.

They are, although it’s kind low-key. Tesla Superchargers are being made accessible to other electric cars.

Another possibility of what could have happened with the Ford vehicle being charged is that there is a bug. Back in September 2020, there was a situation when a software bug in the Supercharger let other vehicles charge through the plug-in points. Though this is now suggestable to charge this way, as the plug-in points are not designed for other vehicles, it was possible.

In the Netherlands, the Superchargers are already available to other EVs. This is considered as an experimental start, where depending on the usage Tesla will further expand access. The company has been working on many things with respect to Tesla owners’ experience which charging their vehicles too. Last month, a Starlink dish was seen attached to a Supercharger. It would be interesting if the Superchargers would be made available to other EVs before other improvements take place like Tesla restaurant, or food joint place.