People protested the approval of Bitcoin as legal tender in El Salvador’s capital, despite a rocky initial rollout of systems to accommodate the digital currency. On Tuesday, El Salvador became the first government in the world to recognize Bitcoin as legal cash. Protesters set fire to tires and fired off fireworks in front of the Supreme Court building, which was guarded by heavily armed police. “This is not a currency that will work for pupusa vendors, bus drivers, or shopkeepers,” a San Salvador resident opposed to the cryptocurrency’s adoption remarked. Pupusas are a traditional corn-based Salvadoran dish. 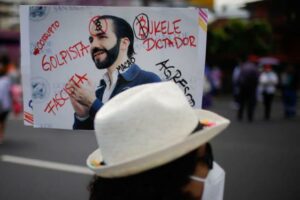 “This is a perfect currency for large investors that wish to speculate with their financial resources.” El Salvador’s administration was rushing to iron out technological kinks in Bitcoin’s first-day launch when the demonstration occurred. El Salvador purchased 400 Bitcoins worth around $20 million ahead of the debut. 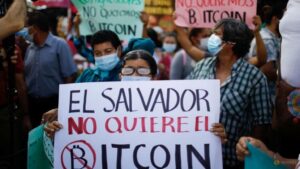 Bitcoin was down on Wednesday after a disastrous deployment of the world’s largest cryptocurrency as legal tender in El Salvador. As of 11 a.m. in Singapore, the virtual coin was trading for around $47,100, after falling as much as 17 percent the day before trimming some of the losses. The downdraft affected Ether, Dogecoin, and the Bloomberg Galaxy Crypto Index, among other tokens.

In a report, Edward Moya, senior market analyst at Oanda Corp., stated, “Social media platforms were highly wary over the weekend that a collapse could occur following El Salvador’s big day.” He believes that several speculators bought in anticipation of the country enacting its Bitcoin regulation on Sept. 7 and then proceeded to “sell the fact.”

El Salvador’s trial with Bitcoin — the most comprehensive evaluation of the cryptocurrency’s real-world utility — got off to a shaky start due to technical issues with the government’s official digital wallet, which were eventually overcome. President Nayib Bukele announced on Twitter that the country now has 550 Bitcoins after purchasing them at a lower price.

The selloff on Tuesday is the most dramatic pause in a rally that has raised Bitcoin about 75% since late July. According to cryptocurrency tracker CoinGecko, the overall market value of cryptocurrencies has dropped by around $280 billion in the last 24 hours. According to Bybt.com, bitcoin liquidations totaled $3.7 billion during the same time period. These occur when exchanges close leveraged positions due to a failure to meet margin requirements.