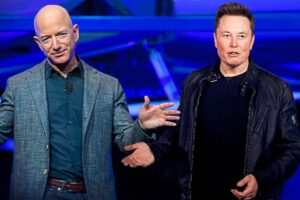 Billionaire CEO Elon Musk is clearly unstoppable when it comes to expanding his status as the richest man on earth. The Tesla and SpaceX Chief Executive has yet grown his position as his net worth is visibly shooting the sky, way more than the top earners this year. In the newest Forbes list, Musk has an increased net worth of $282 billion. In turn, this is $100 billion more than that of Amazon founder Jeff Bezos. Currently, Bezos has a net worth of $183.6 billion, which makes Musk almost $100 billion wealthier than him.

At the onset of the year 2020, Musk’s net worth just sat at $26.6 billion. This was owing to him being one of the largest beneficiaries from the Covid-19 pandemic. Notably, the billionaire CEO’s wealth increased by more than a whopping $110 billion. This marks the record high for anyone in the long history of Forbes keeping track of this sort of numbers. The report stated how Musk had acquired another $90 billion in the year 2021. This contributed to him knocking the Amazon founder off the top of the Forces top richest people list to kick off the year.

Currently, Musk is $115 billion wealthier than Bernard Arnault, the Chief Executive of LVMH. He is presently third in the list of top richest people in the world. Moreover, the report stated that Arnault has a current net worth of $167.4 billion. Additionally, Musk is also way past the numbers of the Microsoft founders Bill Gates and Steve Balmer. According to the report, their net worths are $134.2 billion and $97 billion respectively.

Recently, Musk was all over the news for taking a 9.2% stake in Twitter on Monday, March 14. This made him the largest shareholder of the social media company. Following which, the Chief Executive of Twitter, Parag Agrawal announced that the Tesla CEO would also join them in their board of directors. However, soon afterwards, Agrawal stated that Musk would not join the board of the company.

Since his appointment, Musk has appeared rather active to bring about positive changes to the functioning of the site for people. Previously, he had already been an active user of the social media network, expressing as many of his thoughts as possible. Moreover, he had also landed himself in trouble for some of his tweets on the platform. On the other hand, his active appearance since his appointment is evident through his various posts on Twitter such as about its San Francisco HQ, Twitter Blue, etc.