The asset management firm Soros Fund Management, which was founded by billionaire investor and philanthropist George Soros, has announced that it holds bitcoin. 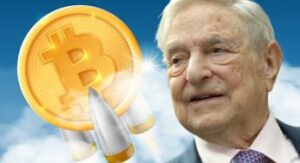 Dawn Fitzpatrick, CEO and chief investment officer of Soros Fund Management, stated in an interview at a Bloomberg event this week that the family office has “some coins… but not a lot.”

When asked how many bitcoins it holds and when it got them, Soros Fund Management, which is known for making enormous gains on traditional currency investments, did not immediately respond to a CNBC request for comment. Fitzpatrick added, “I’m not convinced bitcoin is exclusively perceived as an inflation hedge here.”

“I believe it has crossed the mainstream chasm. ”Fitzpatrick went on to say that cryptocurrencies currently have a market capitalization of over $2 trillion and have over 200 million users.

Bitcoin was over $43,000 a week ago, although one bitcoin could be purchased for around $29,000 at the start of the year. Despite the possibility of regulatory crackdowns from governments around the world and concerns about bitcoin’s massive environmental footprint, the newest rise has occurred.

Treasury Secretary Janet Yellen and Securities and Exchange Commission Chair Gary Gensler both stated this week that they had no plans to impose limits on bitcoin trading.

“Following China’s prohibition on crypto operations, this latest bitcoin gain could be a rerun of history,” he continued. Bitcoin isn’t the only cryptocurrency experiencing a boom. In other news, the price of ether has more than quadrupled since the beginning of the year, from roughly $1,000 per token to more than $3,000 per coin on Thursday.

According to a Bank of America Fund Manager Survey released in April, the majority of professional investors believe bitcoin is just a fad.

The leading cryptocurrency is seen as a bubble by 74 percent of respondents who answered to the carefully followed market gauge. Only 16 percent of those polled replied no, showing that they believe bitcoin is on very shaky ground.