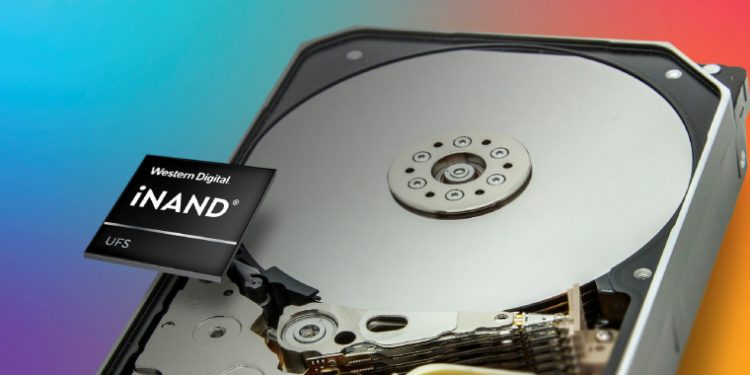 Western Digital has revealed intentions to use iNAND universal flash storage (UFS) embedded flash drives (EFDs) in its forthcoming hard disk drives (HDDs) to enable greater capacity and better performance, among other things. OptiNAND is the name of the technology that powers Western Digital’s storage roadmap up to 50TB.

That’s a substantial amount of storage space. This news comes on the heels of a claim that Western Digital and Noxia are planning to merge to build a $20 billion NAND flash behemoth.

This is not to be confused with a cache buffer or volatile DRAM, which are two completely distinct things.

Western Digital further dismisses any concept that this is a hybrid HDD, claiming instead that it is a “smarter, faster, denser” solution that lays the way for considerably larger capacities than what is now available, thanks to the incorporation of non-volatile flash memory.

This was regarded as “amazing” during the HDD Reimagine event “a technology that improves the daily driving experience.

This is not intended to be a data buffering geared drive for customers.” Because it is an established small form factor (SFF) solution that is quick and non-volatile, the decision to employ iNAND for this purpose was taken.

This is important because it ensures that data is not lost in the event of a power outage.

“When we have non-volatile cache available, we have enough energy in the drive to take the data and write it to the NAND before any data is lost. When write-cache is disabled, we can leave it in DRAM knowing that if power is lost, we can make it safe,” explains Bill Boyle, an engineer fellow of HDD research and development at Western Digital.

Western Digital claims that the first drives designed around its new OptiNAND platform would pack an unparalleled 2.2TB per platter, with nine platters dishing up 20TB of flash-enhanced storage space, thanks to a triple-stage actuator (TSA) and HelioSeal technology.

The company has already started sending out sample drives to a few select clients.

Adding this form of memory to HDDs results in a more complicated architecture overall. To address with this, improved firmware algorithms will assist in juggling the extra metadata that is offloaded to the iNAND, allowing for more tracks per inch and higher areal densities.

Western Digital also claims that “proprietary optimizations” in the firmware have improved drive latency. The goal of these improvements is to reduce the frequency of neighboring track interference refreshes and hence the necessity for write cache flushes (in write cache-enabled mode).

Western Digital claims that their OptiNAND drive architecture will be used throughout its entire array of SSDs and storage devices.

Cloud and commercial clients will definitely reap the benefits initially, however it appears that this may eventually extend to the company’s consumer products as well.