How to send disappearing photos and videos on WhatsApp

WhatsApp is one of the greatest Android messaging applications, and its focus on privacy and security makes it an especially good pick. 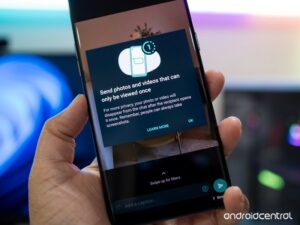 WhatsApp’s disappearing photos function has finally been enabled to the stable version of the software. The function is called ‘View Once,’ and it operates in a similar way to Instagram’s expiring media feature. When you use this function to transmit a photo, it will vanish after the recipient opens it and exits the conversation. However, each time you want to transmit a view once photo or video, you’ll have to choose View Once media.

You won’t be able to forward, save, star, or share images or videos sent or obtained with the View Once media tool in the messaging service. If you have read receipts switched on, you can only see if a recipient has accessed a View Once photo or video.

The photo or video will expire from the conversation if you don’t access it within 14 days after receiving it, according to the Facebook-owned business. However, if the message was unread at the time of backup, the ‘View once media’ may be restored from backup. The media can not be included in the backup and therefore will not be able to be restored if it has previously been viewed.

Anyone may snap a screenshot or capture a screen recording of the media before it vanishes on WhatsApp. Furthermore, the subject will not be alerted if a snapshot or screen recording is taken. WhatsApp also advises that before the material vanishes, users can capture a photo or video of it using a camera or other device. “Encrypted media may be stored on WhatsApp’s servers for a few weeks after you’ve sent it,” the firm adds.

How do I send media through View Once on WhatsApp?

To add an attachment to WhatsApp, open the app and touch the attachment icon.

After choosing it, a clock-like symbol will appear in the ‘Add a caption’ box; simply touch on it to activate the View Once function. The app will display a notice that says “Photo set to View Once” once you activate it. After that, you may share vanishing images to your contacts.