How to watch the Friends Reunion online in India

The release date of the long-awaited Friends Reunion has finally been announced. After a lengthy delay due to the ongoing Covid-19 pandemic, the members of the original cast of the iconic sitcom were able to film the reunion special last month.

Friends: The Reunion episode will be titled ‘The One Where They Get Back Together’ and will bring back all six members, Mathew Perry (Chandler Bing), Jennifer Aniston (Rachel Green), Courtney Cox (Monica Geller), Lisa Kudrow (Phoebe Buffay), Matt LeBlanc (Joey Tribbiani), and David Schwimmer (Ross Geller), together on the show’s set for the first time since the release of Friends finale all the way back in May 2004.

The Friends Reunion will also see the return of some recurring characters such as Gunther, Janice, Jill, and Richard, as well as with a long list of celebrity guests, including Lady Gaga, David Beckham, BTS, Justin Bieber, Cara Delevingne, James Corden, Mindy Kaling, and surprisingly, Malala Yousafzai! 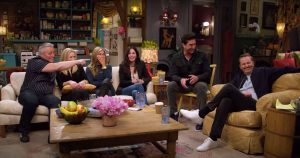 Friends: The Reunion will be an unscripted special episode where Perry, Aniston, Cox, Kudrow, LeBlanc, and Schwimmer discuss their characters and time on the show. As stated previously, there will be a surprise entry of supporting casts and several celebrity guests, as well.

It is important to note that the cast will not be portraying their original characters. Instead, they will be appearing as themselves.

The Friends Reunion teaser has been released and shows the six main actors walking together while an instrumental version of the show’s iconic theme song, ‘I’ll Be There For You’ by The Rembrandts plays in the background.

The release date for the Reunion episode is scheduled for 27 May in the US on the HBO Max streaming service. As of current, the platform is exclusively available to the US and will soon be expanded to Latin America and Caribbean markets in June. European HBO services will be upgraded later this year. However, as of this writing, there is no news on the release date in India.

HBO Max is not available in India yet. This means that fans of Friends might have to wait a little longer to watch the reunion special online. The episode is will most likely not stream on Disney+ Hotstar in the country, as its HBO deal does not extend to HBO Max originals. Despite their common names, HBO and HBO Max are separate entities.

Hopefully, we can expect Netflix, which holds the exclusive rights to stream all episodes of Friends in India, to come through and stream the reunion special to Indian viewers.

In the meantime, if you want to revisit the original show itself, you can catch up on Seasons 1 to 10 in India online exclusively on Netflix.