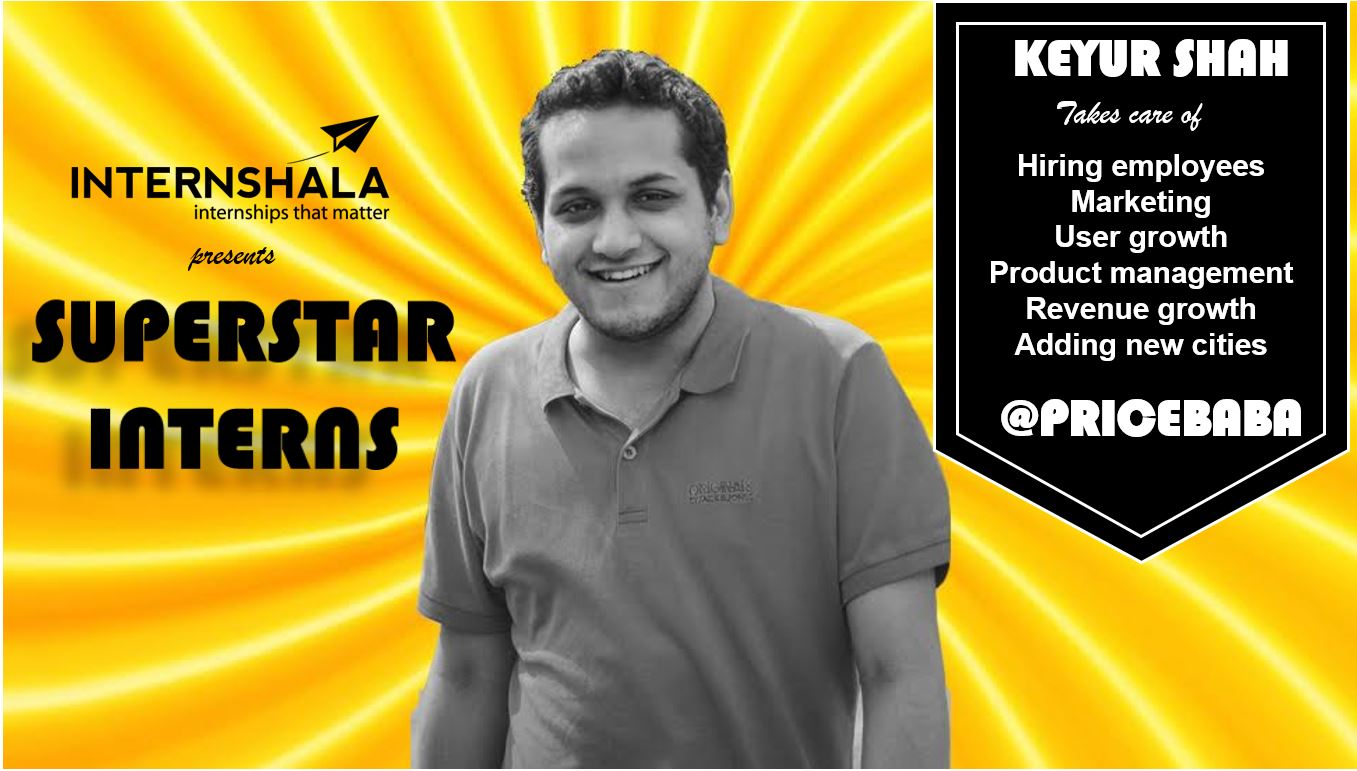 Interns – the reason why many startups have succeeded and survived in India today. Interns bring a lot of passion to learn, deliver and grow and allow every startup to remain extremely agile and cost effective. As a tribute to the contribution of interns to startup ecosystem, Techstory along with Internshala is bringing to you a series focused on Superstar Interns – Stories of interns who have played a significant role in success of the company. The first among this series is the story of Keyur Shah of Pricebaba.

It was the summer of 2013 when Keyur joined Pricebaba as a marketing intern but ended up doing much more than his assigned role. Pricebaba were very small team then, working out of a small bungalow. Soon after Keyur joined Pricebaba, the venture got into the ‘500 accelerator program’ .Founders, Annkur and Tirthesh had to travel to the valley, with Keyur left to manage things in Mumbai.

During the 5 month internship, Keyur tried his hand at almost everything – from Operations (expanded to Delhi and Bangalore) to taking interviews to fill in the new roles for growth. His role varied so much that he jokingly came to be known as the Clerk to CEO.

“If I look back today, the amount of exposure and learning I had at that time was crazy and that is what triggered me to join Pricebaba full-time after another 2 years of studies. Finally, I joined full time in June 2015,” says Keyur about this phase in the Pricebaba journey. Today Keyur is not only a fulltime employee at Pricebaba but is also a part of the leadership team.

“When Keyur first landed at Pricebaba in 2013, I was off to US for ‘500 Startups accelerator program’. He did well launching Pricebaba in new cities and reporting back on ground concerns to me regularly. That was the moment when I recalled that he could be a good leader. A friend at our co-working space later commented to me that “Keyur punches above his weight”. That is true to this date when he has come in as a full time member and is also a part of Pricebaba’s leadership team,” said Annkur, CEO of Pricebaba.

Journey of an Entrepreneur – Annkur Agarwal of PriceBaba talks to Techstory ![/box]

Annkur has been hiring interns right from day 1 at Pricebaba. In fact, he started to hire interns way back in 2009-10 when he used to run OnlyGizmos.

“Personally I think Interns are very important for any new age business. Most of the experienced mid-level hires on the market come from different industries and may not always be a great fit for a startup. So, a healthy mix of interns vs experienced hires is always better. Several interns for us have done even better than experienced hires at times.

The key difference generally is openness to learn new things and self-learn. We find that an intern is much more open to adapt, than experienced folks,” says Annkur.

It has only been a year for Keyur as a full-time employee and he has already taken up a number of challenges in the company. “I started with product management, cracking advertisement partnerships and exploring new business opportunities. Then I moved to entirely managing a new business we were trying in the second hand phone market, Pricebaba Clear. Now I am back to managing product and business development.”

For a company like Pricebaba which had local operations across India, interns played a key role. Pricebaba launched in 15+ cities and a lot of those operations were done by interns. The company then made a major move in its strategy by moving from an offline to an online model and Keyur was instrumental in implementing that strategy as well.

One of the biggest challenges that Keyur helped manage at Pricebaba was moving away from offline business. “I think one of the biggest challenge was moving away from our offline business. By 2015, we had launched in 20 cities across India with more than 2,500 verified stores. We had spent the last 3 years, all our energies, and funds in trying to make that work. However, it was a tough one for us to crack and money wasn’t coming in.

Change was tough but when it was backed with hard data, our online price comparison piece had picked up and money started flowing in, it became easier to convince everybody to phase out offline model from the product,” said Keyur.

Keyur credits his successful stint at Pricebaba to the support that he has got from his team.   “From Dhruv, I learnt the importance of following processes. From Bhumil, I learnt how important is it to analyze pros and cons of any decision we are taking. From Annkur and Nishit, I learnt the very basics of business. There is something to learn from everybody around here. Overall, I guess I learnt much more in this last 1 year than in the past 5 years of my MBA & B.Tech course in college combined.”

Today, being an integral part of the Pricebaba management team, Keyur has his plans laid out for the growth of his company, “5 Years from now we will be India’s foremost product research engine and shopping assistant. Before purchasing anything – from electronics to clothes, people would come to Pricebaba to make their purchase decision.”

Down 5 years, Keyur wants to continue managing products along with business partnerships.

Keyur’s role model is Dhirubhai Ambani and has a great respect for the way Reliance works. He says “If you look at Reliance as a company, they aren’t as media friendly or publicity attractors. They work heads down on their core businesses and create a lot of value. Apart from being technologically one of the most advanced corporates in India, they manage a variety of different businesses with huge scale. That’s something I learn from them.”